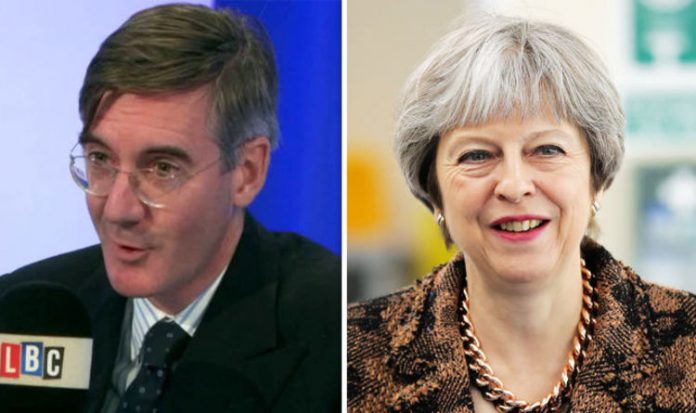 The Tory MP vented his fury at diplomats who warned Theresa May that leaving the EU without a deal would be a “disaster”.

Jacob Rees-Mogg accused EU officials of being out-of-touch with voters, saying the bloc is “devoid of democratic support”.

The Brexiteer made the remarks after one EU envoy said Britain would face huge turmoil within just a week of a no-deal outcome.

Speaking anonymously, the Brussels ambassador said: “It’s not possible to have a no deal. There would be a massive outcry.

“With even a no deal for one week, with no flights to and from the UK, no ships, imagine the economic loss of one week of no economic activity, no personal activity, no financial transactions.

“That would already be a disaster.”

Another official predicted Theresa May would come under mounting pressure from businesses to reach a deal with the EU.

They told the Sun: “The moment the markets understand this is going in the wrong way, the cycle of negotiations and the political dynamics will be taken over by the real world.

“In a few months, the UK will have a credibility issue.

“The moment economic operators understand this is going wrong there will be events on the ground.”

In a furious attack, Brexit-backing Mr Rees-Mogg said the bitter claims by Brussels officials were “delusional”.

He said: “It is wishful thinking by an EU establishment that has failed to notice that its grand scheme has failed economically, is devoid of democratic support and is increasingly unpopular across the continent.”

The comments came as a former Eurocrat claimed a no-deal Brexit could spark the break-up of the UK.

Herman van Rompuy, the ex-European Council president, said such a scenario would have a “big impact on regions such as Scotland”.

The Belgian politician added: “We could end up with a situation in which the EU27 becomes more united and the United Kingdom less united.

“This talk about a ‘no deal’ is the kind of nationalist rhetoric that belongs to another era.”

But he was slapped down by Ukip MEP Nigel Farage who said Mr van Rompuy’s comments were a “scaremongering threat”.

Mr Farage told LBC: “This guy is a fanatic. He wants a United States of Europe, that’s what he believes in.

“People like him do not want Brexit and they will use whatever weapon they can. I don’t think he’s right for one moment.”

A Downing Street spokeswoman said: “We have always said the United Kingdom would continue to thrive in the event of a no-deal Brexit.

“But we are confident of getting a good deal – one that delivers for every part of the United Kingdom and takes back control of our money, laws and our borders.

“That is what this government will deliver.”