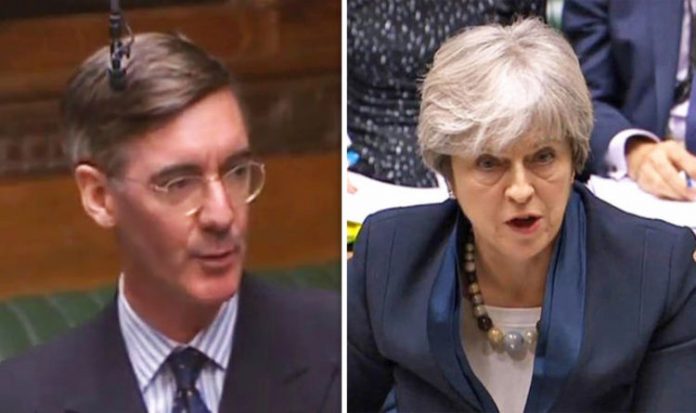 The influential Tory MP made the shock outburst as he urged Theresa May to take a much tougher approach to Brexit.

He raged at the Cabinet’s blueprint agreed at Chequers, saying it would leave Britain as a “vassal state” of the EU.

And he said the Prime Minister would be better off walking away from negotiations with Brussels without a trade deal.

Mr Rees-Mogg said: “The Chequers plan is deeply unsatisfactory and basically means that we wouldn’t be leaving the EU.

“We would still be subject – de facto – to the European Court of Justice, and we would be a rule-taker from the European Union.

“We would have no say and no votes over those rules. That makes future trade deals with other countries extremely difficult.

“The whole point of leaving the EU is that we’re free to make our own rules, not that we’re a vassal state of the EU.”

Mr Rees-Mogg, head of the European Research Group, also accused Mrs May of backtracking over Brexit.

He said the Chequers agreement “tore up” her previous pledges on Brexit made during her Mansion House speech in March.

“The Prime Minister referred to it as an ‘evolution’ but it was one of her big U-turns. This is so craven, weak and feeble.

“When you’re in a negotiation and one side disagrees with you, it’s not a reason to give up.

“It’s a reason to point out the benefits they are getting from what you are offering them.

“We are offering the European Union £39bn – we expect something in return.

“It is impossible to imagine Margaret Thatcher would have got the British rebate from the EU if he had behaved in such a fashion.”

Under such a move, Britain would trade with the bloc under World Trade Organisation (WTO) terms.

Mr Rees-Mogg said: “I think a WTO Brexit is a good Brexit. It’s a clear Brexit. We’re in control of our laws, our money and our borders on day one.

“It will give us an opportunity to get on with domestic policy faster. Being a third country is great.

“It’s independence, it’s liberty and it’s not being shackled to the failing European Union’s economic model.”