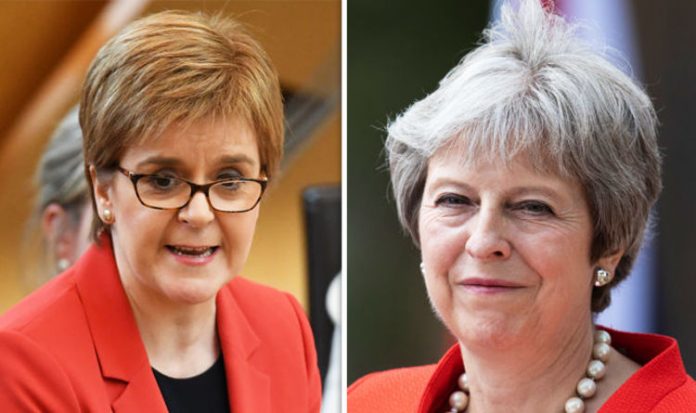 The Scottish First Minister told Mrs May not to engage in “scare tactics” as she claimed a no-deal Brexit would be “catastrophic” for the UK.

She also challenged the Prime Minister to set out her “plan B” for Brexit as she attacked the UK Government’s lack of clarity over the issue.

Mrs Sturgeon said: “It is time the Prime Minister told us what her plan B is. We cannot have no deal and we cannot have a blind Brexit.

“The whole of the UK deserves answers from the Prime Minister and we cannot continue without a back-up plan.”

Follow the latest Brexit updates with Express.co.uk’s live blog below…

One of the UK’s richest men has urged Theresa May to walk away from negotiations with the EU without a deal.

Brexit backer Peter Hargreaves said: “We should have a team that want Brexit and want us out of the EU. The best option is no deal.

No deal would give us free trade with Europe because the three biggest economies in Europe, outside Britain, are huge exporters to the UK.

“That’s Germany, France and Italy. And those three economies would absolutely demand free trade from the EU.

“I guarantee my entire wealth that we would get free trade.”

8:54am update: Hague’s warning to Macron

The ex-Foreign Secretary said the French president would continue to maintain a “hard line” on the exit negotiations.

However, he argued that at a time of global change, the two countries needed each other more than ever.

He told the Daily Telegraph: “In the world of a rising China and a less reliable America, Britain and France will need each other more.”