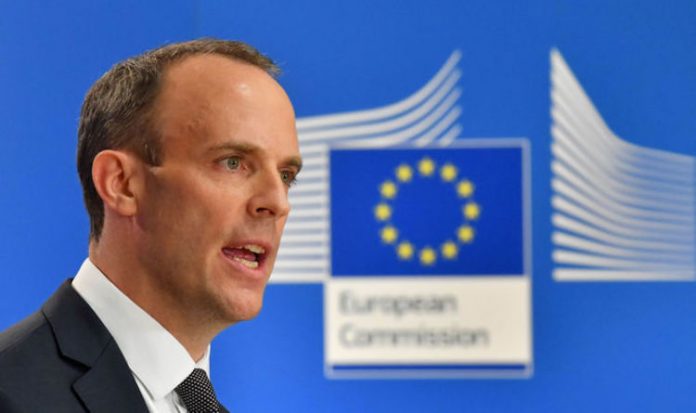 Four of the scenarios conclude with Britain leaving the bloc without a deal.

The report’s authors said: “There are five basic scenarios but the key backdrop to all of this is that there are currently two defaults in place, which mean that, if nothing else happens, the UK will exit the EU without a deal on 29 March 2019.”

On Thursday, the Government will publish the first in a series of technical notices in preparation of the possibility of a no deal Brexit.

The notices will include advices for businesses, citizens and public bodies.

Brexit Secretary, Dominic Raab, has said that agreeing on a deal is the “most likely outcome” and has played down the prospect of leaving the EU without any formal arrangements.

Mr Raab said: “Securing a deal is still by far the most likely outcome, but we want to ensure we clearly set out the steps that people, businesses and public services need to take in the unlikely event that we don’t reach one.”

Around 70 technical notices are expected to be published by the government between late August and the end of September.

Car manufacturer Ford has warned it will take “whatever action is needed” to protect its business against Brexit.

The American car giant blamed uncertainty over Britain’s departure from the EU for a £760m drop in its European earnings in 2017.