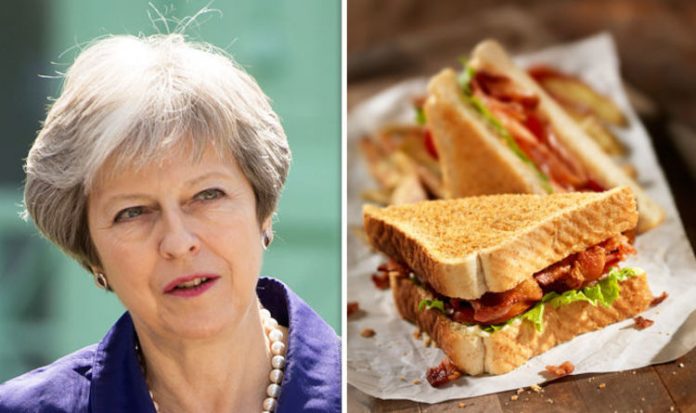 The sandwich industry fears Britain could leave the EU without a trade deal, creating new customs checks and delays at ports.

This could prove disastrous for crucial ingredients including cheese, ham, tomatoes and lettuce which are imported from the EU.

Jim Winship, head of the British Sandwich Association, said: “I don’t think consumers understand how complex and global our industry is.

“If we crash out of Europe, we’d have problems at border control. Our industry works on a fresh basis and our products have a low shelf life.

“Ingredients could rot in the docks before getting to us.”

Britons buy about four billion sandwiches per year, with many of the ingredients being imported from EU member states.

Ireland accounts for a staggering 82 percent of the UK’s cheddar imports, according to research by Politico.

About 60 per cent of pork eaten in the UK is imported, largely from Denmark, Germany and the Netherlands.

Four-fifths of tomatoes consumed in the UK are brought in from overseas, with the biggest amount coming from Spain.

A Food and Drink Federation spokeswoman said there would be “serious disruption to supplies” in the event of a no-deal Brexit.

She added: “This would have implications for product availability and consumer choice.

“Delays and blockages at the ports would pose a particular threat as we import 40 percent of our food and drink either directly from, or via the EU.

“This is why we continue to argue for frictionless trade with the EU.”

A Government spokesman last week played down the fears of Brexit creating a food shortage.

He said: “The UK has an excellent level of food security, built on access to a range of sources including strong domestic production.

“This will continue to be the case as we leave the European Union, whether we negotiate a deal or not.

“While we are making sensible preparations for all eventualities as we leave the EU, there are no plans to stockpile food.

“The Government has well-established ways of working with the food industry to prevent disruption.

“Consumers will continue to have access to a range of different products.”