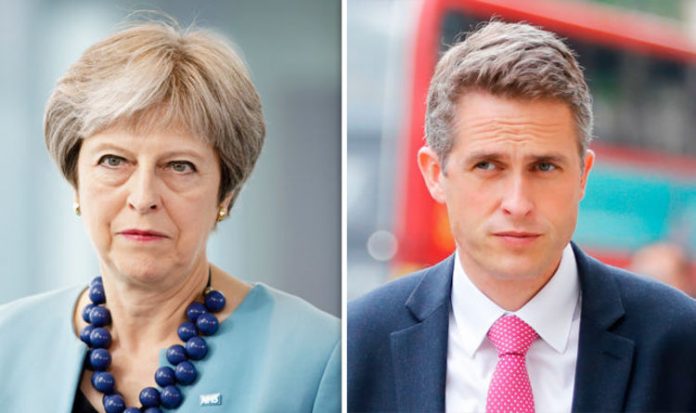 Mrs May has repeatedly refused to boost the UK’s defence budget, despite requests from Defence Secretary Gavin Williamson.

The Prime Minister has also failed to commit to the UK remaining a ‘tier-one’ military power after leaving the EU next March.

And Dr Tara McCormack, a politics lecturer at the University of Leicester, backed Mrs May’s pragmatic stance on defence.

She said: “Theresa May is entirely right to say that defence policy needs justification.

“Brexit can and should be an opportunity for Britain to have a serious debate about our foreign and security policies and our underlying national interests.

“Unfortunately, at the moment, British politicians and the military establishment are like cyclists who daren’t stop pedalling to actually think about their actions – beyond a fixation with maintaining Britain’s status as a big military power.

“Aside from doubling down on nostalgia for when Britain ruled the waves, we need to step back and think much more seriously about what we want to do and be in the world.

“The debate about British foreign and security policy, and the underlying question about our national interests, has been preserved in aspic since the end of the Second World War.

“We need an honest discussion and also an honest evaluation of post-Cold War British foreign policy.”

Dr McCormack said Britain’s foreign policy since the 1980s had been “extremely destabilising”, especially in Iraq, Libya and Syria.

Writing on the London School of Economics’ Brexit blog, the academic added: “Britain needs to have a serious democratic debate about foreign policy and the role that we want our country to play in the world.

“This means an honest debate that moves beyond bombast, platitudes and sheer hypocrisy.

“Brexit has the potential to open up a space for debate. One approach would be to genuinely support a ‘rules based international order’.

“That would mean, however, disavowing much of our current foreign policy.”

She urged Mrs May to reject calls for regime change in unstable countries, and instead back diplomacy over military action.

Last month, the Prime Minister said her focus was on modernising the armed forces and ensuring the military is “cost-effective”.

She told the House of Commons: “The Government will do what they need to do to ensure that we are a leading military power.

“But we need to ensure that we look at the threats that we are now facing and the capabilities we need as these threats change.”

She made the comments after Defence Secretary Mr Williamson demanded an extra £4bn per year for the armed forces’ budget.

He reportedly threatened to oust the Prime Minister if she refused to inject the extra cash into the Ministry of Defence.

Mr Williamson, who ran Mrs May’s Tory leadership campaign in 2016, apparently told colleagues: “I made her, and I can break her.”

But his claims were mocked by a senior Tory who branded Mr Williamson a “weasal” over his “intemperate and frankly bizarre media posturing”.

The anonymous MP added: “He’s clearly overpromoted and thinks stamping his foot stops him from being found out. It doesn’t.

“The longer he’s at the MoD, the less chance he has of ever leading the Conservative Party.”