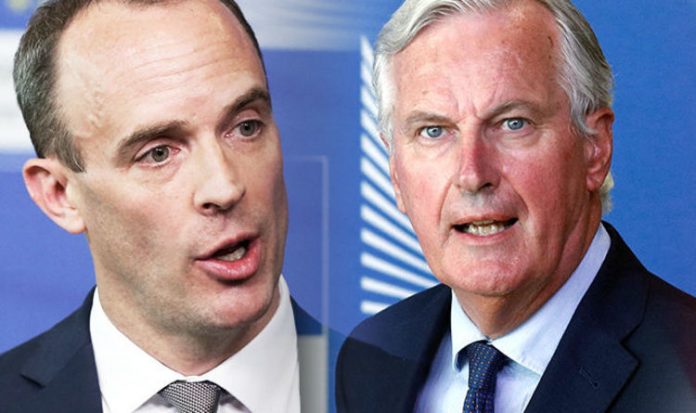 The comments come at a time when there is increasing pressure on leaders to make a deal at the summit in Salzburg, which will be the first time that EU leaders have met together since the Chequers Brexit proposal.

Mr Raab has said that the Salzburg summit will be an “important milestone”.

In an interview with top European papers, including Die Welt, Mr Raab said: “We made compromises and we showed ambition – and we do need to see that matched on the EU side.

“Salzburg is an informal EU summit, but it will be an important milestone – a stepping stone if you like – to show we’ve actually got the contours of an agreements on principles to continue to the final week of these negotiations. We haves shown a lot of flexibility and we have been very pragmatic. So I think this is the moment to see that matched. The ball is a little bit in the other court now.”

This week the Commons Select Committee on exiting the EU published a report saying that a “no deal” outcome to the Brexit negotiations between the UK and the EU would be “chaotic and damaging” for the British economy.

The International Monetary Fund has warned that leaving the EU without a Brexit deal, which is becoming increasingly likely, will shrink the UK’s economy.

8am update: Mr Raab says the government’s proposal on the post-Brexit border with Northern Ireland an EU is the only credible one.

Seeking to Berlin’s Spiegel Online, Mr Raab said: “These are so far the only proposals that guarantee smooth trade between Britain and the EU and take account of the specific problems in Ireland. I have seen no other credible alternative, either from here or from the EU side.”

So far in the discussions, there has been no comprehensive agreement on the best way to avoid a hard border between Ireland and Northern Ireland.

7:30am update: Angela Merkel said “the UK must suffer a little bit”

The German Chancellor has been heard to say in private that the “UK must suffer a little bit in these Brexit negotiations. They can’t have a sweetheart deal”, according to the BBC political editor Kirsty Wark.

The comments were made as Theresa May has warned MP that if her Chequers proposal is not supported in the House of Commons, the UK will face a “no deal” Brexit.