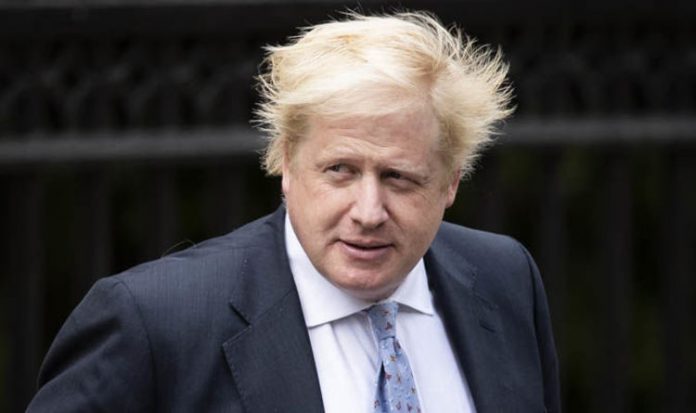 In his weekly column the former foreign secretary has warned that the proposals to deal with the Northern Ireland land border with Ireland will end “in a political car crash” and leave Britain as a “vassal state” to the EU.

Mr Johnson said that last December he and others had signed up to the agreement because they had been given private assurances that it would never be invoked.

The backstop would see Britain’s regulations tied to those of the EU and could see Northern Ireland kept under EU rule in the single market.

Although she is signed up to the principle of a backstop if no better arrangement can be agreed, Mrs May has robustly rejected the version put forward by Brussels, which would see Northern Ireland remain within the EU customs area and effectively draw a customs border down the Irish Sea.

However, Mr Johnson denounced alternative plans set out by the PM as a “constitutional abomination” which would leave Britain as a “humiliated rules-taker”.

Mr Johnson has backed proposals by the pro-Brexit European Research Group that physical checks can be done away from the border, without keeping the UK or Northern Ireland tied to EU customs rules.

And it has been reported that the EU is preparing to accept use of technology to avoid the need for new border infrastructure.

Mr Johnson said: “If the Brexit negotiations continue on this path they will end, I am afraid, in a spectacular political car crash.

“If we are to get out of this mess, and get the great British motor back on track, then we need to understand the Irish backstop, and how it is being used to coerce the UK into becoming a vassal state of Brussels.”

He added that the EU’s backstop would leave a border down the Irish sea while the UK’s proposal left it “volunteering” to “remain effectively in the customs union and large parts of the single market until Brussels says otherwise.

He wrote: “Both versions of the backstop are disastrous.

“One threatens the union; the other version, and its close cousin, Chequers, keep us effectively in the EU, as humiliated rules takers.

“We need to challenge the assumptions of both these Irish backstops, or we are heading full throttle for the ditch with a total write-off of Brexit.

“We are straining at the gnat of the Irish border problem, in fact we haven’t even tried to chew the gnat, and we are swallowing the camel of EU membership in all but name.”

But Number 10 hit back pointing out that Mr Johnson had himself signed up to the joint report agreed by Mrs May and Mr Juncker, including the backstop provision, and had remained in government for a further seven months afterwards.

The Prime Minister’s official spokesman said: “Boris Johnson was a member of the cabinet which agreed to the December joint report, including the backstop.

“At the time, he congratulated the Prime Minister for her determination in securing the deal.

“He remained in Government for a full seven months after the joint report was agreed. He was also a member of the cabinet sub-committee which agreed the UK’s proposed customs backstop.”