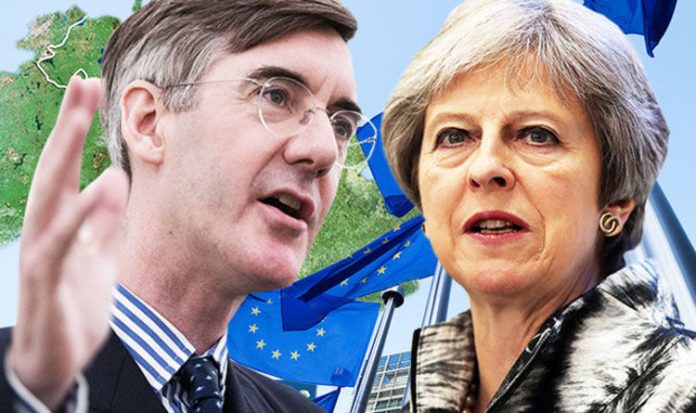 It is expected to set out a different vision for Britain’s post-Brexit future relationship with Brussels in contrast to the close customs links backed by the Prime Minister.

Senior Tory Jacob Rees-Mogg, chairman of the European Research Group, is understood to be drawing up the proposals with the help of former Brexit minister Steve Baker.

Up to 80 backbench Tories could support the plan in open defiance of the Government’s position on Brexit.

And the move is expected to intensify the party row over Europe in the run up to the annual Tory conference at Birmingham in the autumn.

Calls for a “positive” alternative vision of Brexit have been growing among Tories since Mrs May’s Cabinet agreed her compromise plan in an away-day summit at her Chequers country residence last month.

READ  'Would you ask a MALE Prime Minister that?' Furious May hits out at interviewer's question | Politics | News - UK

The agreed plan, including a “common rulebook” covering trade in goods, led to the resignations of senior minister Boris Johnson and David Davis.

Members of the European Research Group are understood to favour a free-trade deal similar to that recently agreed between the EU and Canada.

Such a model could allow tariff free trade without the UK remaining part of the EU’s single market or customs union.

The paper is expected to say that Britain could thrive on the basis of World Trade Organisation rules if Brussels refuses a Canada-style deal.

“A trade deal would be the best outcome, but the Chequers plan is moribund,” he wrote in a newspaper article.

“No deal is likely and would be a good second best, making a better deal possible later.”

Lord Lilley added: “Far from falling off a cliff, World Trade Organisation terms are designed to ensure that members can trade without discrimination.

“The EU will have to offer us the most favoured nation terms its other leading trading partners enjoy.”

One European Research Group source was quoted by a newspaper yesterday as saying: “We have made it very clear that we do not accept the Chequers proposals but there is an acknowledgement that we need to make the case for an alternative.

“The tricky bit is coming to a common position that everyone can sign up to. But I’m confident that we should be able to achieve that.”

Another source was quoted as saying: “We are working to come up with a positive policy paper that will take a realistic approach outlining what is acceptable in line with the referendum result.”

But the European Research Group is facing a challenge from a rival faction of MPs committed to backing the Prime Minister’s Brexit plans.

The new Brexit Delivery Group, set up by backbenchers Andrew Percy and Nick Boles, is seeking to unite Tory MPs who voted both Leave and Remain in the 2016 EU referendum.

“We need an agreement that stands the best chance of getting through Parliament,” the pair wrote.

“We are worried that this outcome could be put at risk by those who, perfectly honourably, seek the purity of perfection.”