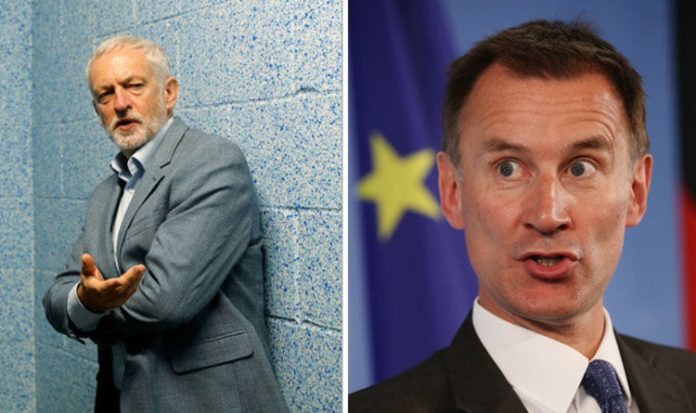 In a significant toughening of the Government’s criticism of the opposition in the anti-Semitism row, the Foreign Secretary suggested the Labour leader’s honouring of Palestinian militants made him unfit to be prime minister.

Writing on Twitter, Mr Hunt said: “If Jeremy Corbyn thinks terrorism is justified for the causes he believes in, how would he as prime minister have the moral authority to condemn terrorist murders of British citizens? Unbelievable and shocking.”

The president of the Board of Deputies of British Jews, Marie van der Zyl, also savaged the Labour leader yesterday for his decision to “cavort” with terrorists.

“After days of being evasive, Jeremy Corbyn has now admitted attending a memorial event for the terrorist murders of unarmed athletes. How can you say he is not involved?” she told BBC Radio 4’s Today programme.

“In 1972, these are unarmed people who were attending the Olympics, they were savagely mutilated and murdered. There is no reason Jeremy Corbyn should not apologise to the widows and to the victims for this terrible massacre.

“He needs to also recognise that he can’t cavort with terrorists.”

The row originally erupted after pictures emerged of Mr Corbyn holding a wreath at the cemetery. A plaque in the picture was said to have honoured the founder of the Black September terror group.

Labour said he had attended the event to remember victims of a 1985 Israeli air strike on Palestinian Liberation Organisation (PLO) offices in Tunis.