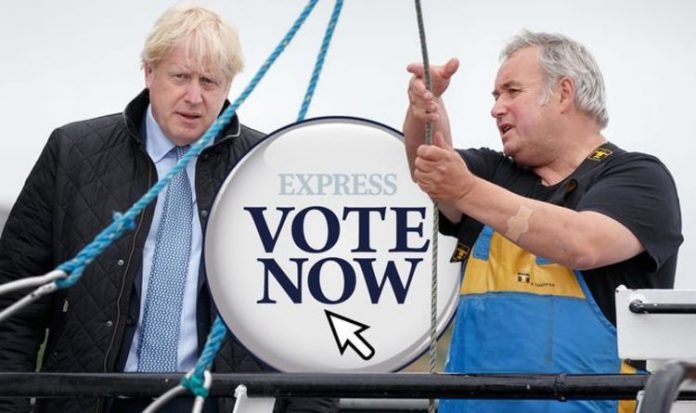 As Brexit negotiations go down to the wire, the EU’s chief Brexit negotiator Michel Barnier is believed to have told ambassadors Mr Johnson is now asking for a return of up to 60 percent of EU catches in UK waters, down from his original demands of 80 percent. The move would make a major climbdown on an issue both sides have stubbornly refused to budge on amid little sign of progress on the key issues.

Britain has repeatedly stated that, following Brexit and as a newly independent coastal state, it wants to be in control of its waters and fish.

European fishing vessels fish six times as much in UK waters as British vessels do in EU waters, which means the UK has leverage in the talks.

Brexit negotiations have been deadlocked for months over the issue of fishing rights with talks coming down to the wire ahead of the transition deadline of December 31.

Time is tight to secure a free trade deal between the two sides, with the transition period set to end in just over a month.

Talks stretched late into the night as both sides fought their corners with the clock ticking down to the deadline for a trade deal.

It was reported that several boxes of pizza were delivered to the talks venue on Wednesday night as officials from London and Brussels tried to hammer out an agreement ahead of the end of the transition period on December 31.

Prime Minister Mr Johnson has repeatedly insisted the UK’s “bottom line” on a post-Brexit trade deal is to “take back control”.

He said he is ”absolutely committed” to trying to secure a deal “if we can” but the EU knew what the bottom line was.

At a Downing Street press conference, Mr Johnson said: “I think our friends know what the UK’s bottom line is and what people voted for on June 23, 2016 – they voted to take back control.

“It’s about making sure that the UK is able to run its own laws, its own fisheries and so on.”

It comes amid warnings talks with the EU have reached a “make or break” point.

Mr Barnier is said to have warned that significant differences remain over fisheries, state aid rules and the governance arrangements for any agreement.

He said negotiations on a trade deal with Britain were reaching “a make-or-break moment”, and they urged him not to be rushed into an unsatisfactory agreement.

While both sides have acknowledged that time is running out, there has been no sign that either is prepared to make a decisive move that could resolve the issue one way or the other.

On Tuesday, French President Emmanuel Macron sounded a warning that he would not accept an agreement that “would not respect our interests in the long term” amid concerns in Paris that Mr Barnier is preparing to give ground over fishing rights.

The news highlighted France’s determination to defend access to British waters for French fishermen during talks over Britain’s future relationship with the EU.

There are fears in France of a major surrender from Mr Barnier in what would be the first major concession from the bloc in talks on their new relationship after the UK finally unshackles itself from the bloc.