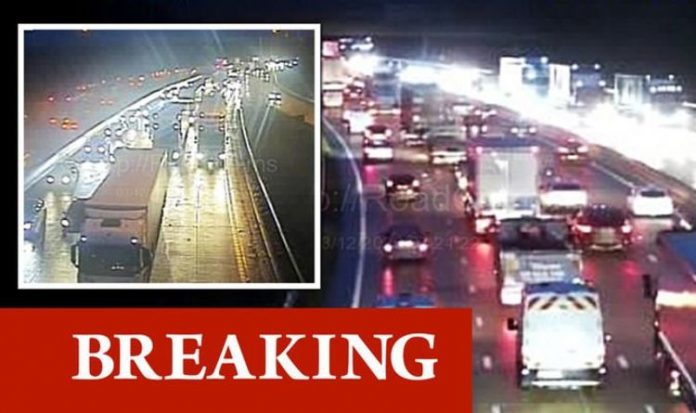 The M25 anticlockwise between junctions 25 and 24 is experiencing some heavy traffic following a broken down vehicle this morning. The are currently delays of up to 30 minutes against expected traffic. There are now queues of up to nine miles.

Normal conditions are expected between 9.15am and 9.30am.

The trafficdelays.co.uk website said the congestion is causing moderate disruption with the delay length between 15 minutes and three hours.

Highways England have said traffic between the two junctions is currently “not moving”.

There is one of four lanes closed.

This is due to a broken down lorry which has closed two lans on the Dartford Bridge.

Last week, an entire stretch of the carriageway in Kent was forced to closed due to an incident involving three lorries.

The incident took place on the M25 anti-clockwise between Junction 2 and Junction 1B.

Yesterday, there was a spike in traffic on the rose as non-essential shops were given the green light to reopen as the second lockdown came to an end.

While 99 percent of the country is in Tier 2 and 3 of the new Covid-19 restrictions limits social contact between households, shops were allowed to reopen ahead of the Christmas period.

Now families have been given the freedom to form festive bubbles, experts have predicted traffic will be mayhem this Christmas.

Rail industry body the Rail Delivery Group (RDG) said that although there is “no concern” of overcrowding on train carriages, thousands of services are expected to run daily to cope with more passengers.

Robert Nisbet, director of nations and regions for the organisation, said: “Rail companies are working together with the Government to ensure that passengers can travel with confidence over the festive period and thousands of services will continue running daily up to and after Christmas.

“The latest information is on train operator websites and we are asking people to book ahead, avoid busy times and check before they travel.

“Through our safer travel pledge we are cleaning more often and providing better travel information, and we’re asking people to help others by washing their hands regularly and wearing a face covering, unless exempt.”