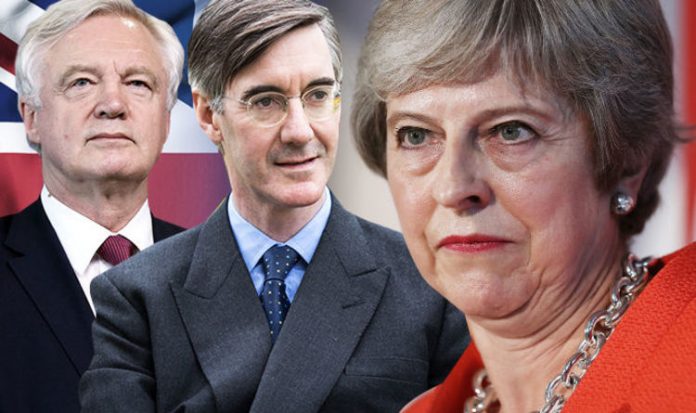 The warning tonight by David Davis came in an interview with the Huffington Post where he also made it clear that Brexiteers on the Tory benches have no fear of a “no deal” with the EU and relying on World Trade Organisation (WTO)  terms dismissing Treasury doom mongering as “b******s”.

Mr Davis earlier this year quit the cabinet because the Chequers proposals were drawn up by civil servants led by the controversial Olly Robins without his knowledge as Brexit Secretary.

He and others including Boris Johnson, who resigned as foreign secretary with him, have warned that they will leave Britain tied to Brussels rule.

He said: “Every group in any political party has differences, egos and so on.

“But with Labour voting against the critical size of the voting bloc is quite small, it’s basically a dozen people.

“The rock-solid core of the European Research Group (ERG) [of Tory Brexiteer MPs] is a multiple of that. It’s probably 30, 40.”

On the Treasury’s latest attempts at Project Fear, Mr Davis said: “What the elites don’t understand is what in one context they would call ‘crowd sourcing, the wisdom of crowds’, in another context is ‘populist democracy’, they think it’s the dumbness of crowds.

“Actually it’s everybody talking about their own circumstance, the thing they are all expert in.”

Speaking to German business chiefs in Munich earlier, Mr Davis branded the Chequers plan “a non-starter” which was “in no-one’s interests” and would be worse than no-deal.

He rejected as unacceptable her plans for a free trade area for goods under a common rulebook, and dismissed her other key proposal for a “Facilitated Customs Arrangement” as “clunky and impractical”.

Mr Davis warned that Mrs May’s proposal of a “common rulebook” for goods would put the UK in the position of having to obey regulations drawn up in Brussels.

He said: ”For a nation that is seeking its independence and endeavouring to chart its own path in the world – how can this possibly be acceptable?

“For the fifth largest economy in the world, leading the way on innovation, we cannot be governed by a body that we have no control over.

“It should not even be contemplated.

“We should be discussing these regulations as friends and collaborators, by all means.

“But we cannot simply accept them as subordinate rule takers. No self-respecting democracy could.”

The Prime Miniters’s proposal for Britain to collect customs levies on behalf of the EU was “just as clunky and impractical as it sounds”, he said.

And he warned: “There is widespread opposition to Chequers as it stands, let alone further concessions. It goes beyond the Prime Minister’s red lines, and it is seen as unworkable by the EU.

“But most importantly, the British people will not accept it.

“But if a deal like this is accepted by both sides, resentment among the British people would swiftly return, distrust in politicians would deepen and it would feed the electoral fortunes of European populist parties. Chequers, then, is in no-one’s interests.

“The EU is often correctly described as having a democratic deficit. But Chequers is devoid of democracy altogether.

“A bad deal really is worse than no deal.”

The attack from a  former cabinet minister came as an MP who was on Mrs May’s leadership team announced he could no longer support her vision for Brexit.

Sir Mike Penning, a former defence minister who voted Leave before backing Mrs May for the party leadership, said she had treated Tory MPs “like children who belong on the naughty step”.

The former soldier announced he was joining the Brexiteer European Research Group (ERG) chaired by Jacob Rees-Mogg, saying: “I’ve come to the conclusion that this ‘put up, shut up’ attitude of the Prime Minister’s – ‘it’s Chequers or nothing, you do as you’re told or else’ – is a massive insult, not only to my colleagues but also to the voters.

“She is playing a game of Russian Roulette with the country which is frankly an insult to the referendum result and all those people who voted, no matter how they voted.”