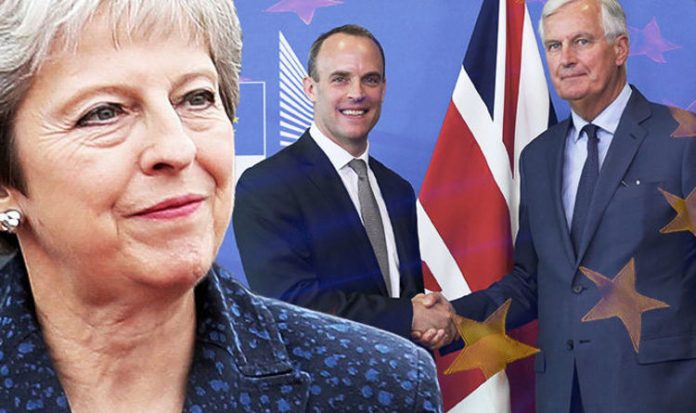 A senior source has told the Express that there has been a “marked change of attitude” from the EU negotiators who have taken a much more “pragmatic” approach.

The source added: “There is a narrative that nothing will be agreed before November but we believe we can get this done and dusted by October”.

The senior source said that the EU is showing more flexibility on the issue behind the scenes.

The source noted: “If they [the EU] show the same imagination, energy and drive as we have brought to the table then we can get a deal done.

“We are seeing signs of that now.”

This means Theresa May could have a deal to put to Parliament after the October European Council summit.

It follows reports that French President Emmanuel Macron has performed a U-turn on his approach to Brexit and started pushing for compromise as other member states have begun to fear the consequences of a “no deal” which could cost the EU £500 billion.

Speaking at a press conference in Brussels, a much more positive Mr Barnier said: “We have I think all the necessary building bricks to build a close and effective relationship between the Union and the United Kingdom on a series of subjects which are very important for the citizens.”

He repeated his pledge to build an “ambitious partnership without precedent” with the UK after Brexit.

Mr Barnier went on: “If we achieve what was in the March guidelines then you really do have a partnership with no precedent, this a very ambitious free trade agreement, specific agreements in all sorts of area of common interest.”

He made it clear that the EU has retreated from its opposition to allow Britain to share in the disputed Galileo satnav project after Mrs May threatened to launch a rival if the UK was locked out.

He said he was “determined” to reach an agreement ahead of the October deadline, though he said there would be “flexibility” for further negotiations.

Standing alongside Raab, he said: “Week after week and step by step we are eliminating subjects, bones of contention… I’m determined, we’re going to find an agreement for an orderly withdrawal which is much better than the opposite and Dominic and I think it’s possible to reach that in October.”

Mr Raab said that he wanted to continue “accelerating and intensifying” negotiations, adding: “We’re committed to resolving the deal by (the October council) and ultimately on my side I am stubbornly optimistic that a deal is within our reach.”

However, Northern Ireland and the land border with Ireland remains a sticking point.

Earlier, Mr Barnier said a backstop is “essential to conclude the negotiations”, stating: “With no backstop there will be no agreement.”

He described the issue as a “matter of some urgency”, adding that he had asked the Brexit Secretary to provide data on how the “necessary controls and checks take place”.

The Prime Minister has repeatedly said she will refuse to contemplate any backstop deal that treats Northern Ireland differently from the rest of the UK.

In the event of a hard no-deal Brexit, the EU wants a backstop that would effectively create a border down the Irish Sea between the island of Ireland and Great Britain.

The UK Government insists that any backstop position should include the UK as a whole.

He said: “On Northern Ireland we remain committed to giving effect to the joint report, continuing the work on the potential solutions, working with Michel and his team on some of the issues he’s raised and continuing to drive that forward.

“The solutions must be workable, they’ve got to be workable for the communities living in Northern Ireland and living in the Republic of Ireland.”