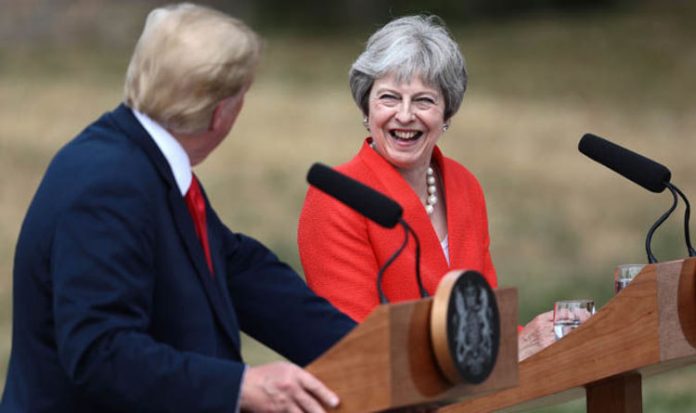 The US President said the Government should take legal action to get the best deal, the Prime Minister said.

Mr Trump told her to scrap the Article 50 process and tell Brussels “see you in court”.

Mrs May told BBC1’s Andrew Marr Show, following her talks with the President on Friday: “He told me I should sue the EU, not go into negotiations. But interestingly he also said don’t walk away from negotiations because then you’re stuck.

“So I want us to be able to sit down to negotiate the best deal for Britain.” Mrs May also spoke of how the President grabbed her hand as they walked through the garden at Chequers.

“Whenever he takes me down a slope or stairs, and he did it up the steps at Blenheim Palace, he takes my hand to help in going up the steps.”

Asked how she felt about “being so close” to a politician accused of sexism, the Prime Minister said: “I’m very clear about the way women should be treated and the respect women should be given.”

Asked if she could trust anything Mr Trump says, the Prime Minister said: “I sit down with the President of the USA and we come to agreements and put those into place.

“And that is part of the very special, the highest degree of special relationship that we have.”