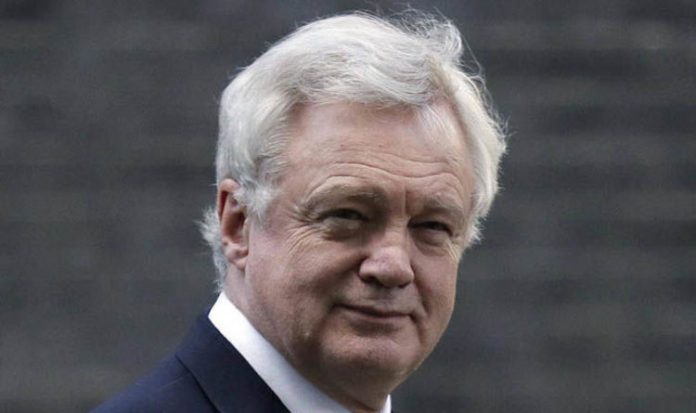 In an angry broadside a week after his resignation from the Cabinet, the former EU Exit Secretary said his department had drawn up plans for looser post-Brexit customs ties to put to Brussels than those proposed in the Prime Minister’s plans.

He claimed that the Government had “blinked in negotiations with EU diplomat Michel Barnier by abandoning his department’s plans.

And he accused the Cabinet of having made “concessions to the EU that were so fundamental they risked undermining the whole Brexit process”.

In a Sunday newspaper, he wrote: “Some are saying that those on the other side of the argument have no workedout alternative.

“This is an astonishingly dishonest claim. For the past seven or eight weeks my erstwhile department had been working on a White Paper based on the Prime Minister’s speeches.

“The individual chapters of the paper were being painstakingly agreed with the individual departments of state before the whole paper was put to the Cabinet – which, of course, it never was.”

Mr Davis also accused the Prime Minister’s allies of “crude pressure play” in a warning ahead of the crunch Cabinet meeting on Brexit at Chequers that any ministers who quit would be immediately stripped of their ministerial car and forced to order a taxi home.

Mrs May hit back at Mr Davis by insisting he had taken her plan into the discussions with Mr Barnier. She told the BBC Andrew Marr Show that Mr Davis had not been cut out of the negotiations that had been taking place.

The PM said Mr Davis had proposed her plan after Mr Barnier had warned that the Government’s previous position could not be used as the basis for negotiations.

She added: “We had a choice. We could have said, ‘well let’s stick where we are and see what happens,’ and risk actually ending up with a chaotic leaving, which I don’t think is in people’s interests.

“But the benefits that this proposal brings are that it enables us to ensure we have friction-free trade for all those people whose jobs depend on integrated supply chains, on just-in-time processes. This protects those jobs.

“And on the other side, it enables us to do trade deals around the rest of the world.”

Mr Davis’s former colleague Steve Baker, who also quit the Government last week in protest at the Prime Minister’s Brexit plans, yesterday accused Mrs May of a “cloak and dagger” plot to undermine the process. The former Brexit minister suggested the Prime Minister’s allies had used subterfuge to force through her plan agreed at Chequers.

He said: “It does appear to me that there has been a year’s worth of cloak and dagger to land us into the Chequers position.”

In a newspaper interview, he added: “An establishment elite who never accepted the fundamental right of the public to choose democratically their institutions are working towards overturning them.”