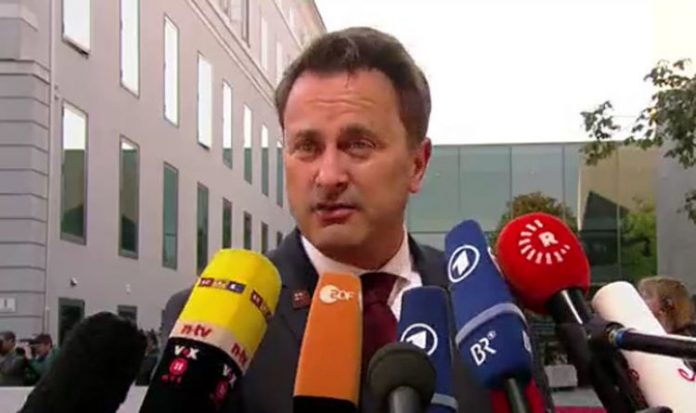 Mr Bettel was speaking to reporters at a summit in Salzburg, Austria this morning.

“I listened to Theresa May carefully. We will listen to Michel Barnier. The Chequers plan was not easy to pass through her own Government.

“I’m convinced we will find an agreement.

“We both need to find a compromise. A balance.”

Mr Bettel added: “There’s still difficult points but I have a belief we will be able to find an agreement.

“It’s a compromise on both sides. Not on one side.

“It’s a better atmosphere than recent months. We discussed different points and I think we can move on.

“There are discussions now about being able to pay for solidarity, and those decisions must be respected.

“We are not speaking about carpets and goods – if we talk about the price of an immigrant it’s a shame for all of us.”

His comments came as Theresa May received a welcome boost from Austrian Chancellor Sebastian Kurz, who revealed EU leaders understand they must engage positively with Britain in order to secure a withdrawal deal.

Mr Kurz said despite harsh public statements, intrnally EU leaders know the only way to conclude a Brexit deal is to work with the British, which could include “budging” on their position.

He told reporters differences remain between Mrs May’s Chequers proposal and the negotiating mandate from Brussels.

But he insisted there should be a level of “optimism” going forward.

The Austrian Chancellor also confirmed an emergency Brexit summit will be held in November to help conclude a deal that is acceptable to the British and European Parliaments.

Mr Kurz, who is hosting EU leaders in Salzburg as part of his EU Presidency, said: “Theresa May presented her position yesterday, today we will discuss it.

“I believe there should be a bit of optimism here.

“The medial positions have hardened, the fronts are clear but the positive is that during the meeting and talks with colleagues, I do have the impression that everyone is aware that if we want to achieve a deal both sides have to budge.”