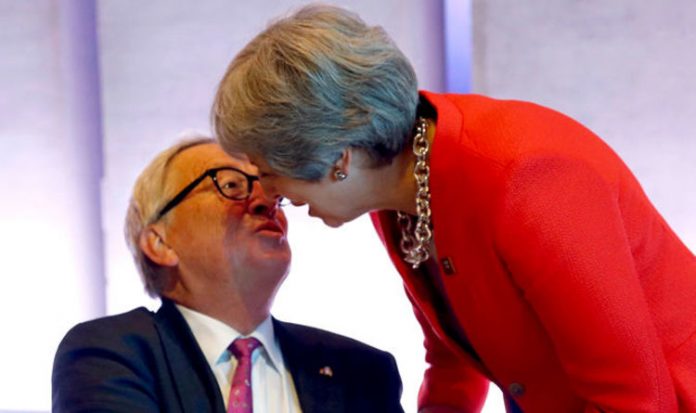 Last night, Mrs May appealed directly to her European counterparts to drop “unacceptable” Brexit demands that she warned could rip Britain apart, urging the bloc to respond in kind to her “serious and workable” plan.

The Prime Minister attempted to win over the 27 other EU leaders by asking them what they should do if they were asked to agree a “legal separation” of their countries.

This is something she says the EU is asking for by insisting Northern Ireland might stay under EU economic rules.

Theresa May told them over dinner that the UK has given them a “serious and workable” proposal to consider.

According to a senior British government source, she told the summit: “I believe that I have put forward serious and workable proposals.

“We will of course not agree on every detail, but I hope that you will respond in kind.

Her speech was praised by Jean-Claude Juncker, who said: “It was interesting, it was polite, it was not aggressive. She is doing her job.”

But European leaders have been left unimpressed, criticising the continued lack of progress over Brexit negotiations.

After last night’s dinner meeting, French President Emmanual Macron said: “We have very clear principles regarding the integrity of the single market and regarding precisely the Irish border.

“It was precise in March and it was endorsed by the 27 members.

“So, we have to find collectively and we need a UK proposal precisely preserving this backstop in the framework of a withdrawal agreement.”

Lithuanian President Dalia Grybauskaite said: “At this stage, it’s a standstill. There is no progress.”

Slovakia Prime Minister Peter Pellegrini added: “On the border issue, there has been no progress.”

Leaders of the EU27 are reconvening without Mrs May today to formulate a response to her push for a deal with Chequers as its basis.

Britain is hoping Brussels will redraft its negotiating mandate ahead of an emergency Brexit summit in November, which looks more likely as the October deadline has seemingly been ditched.