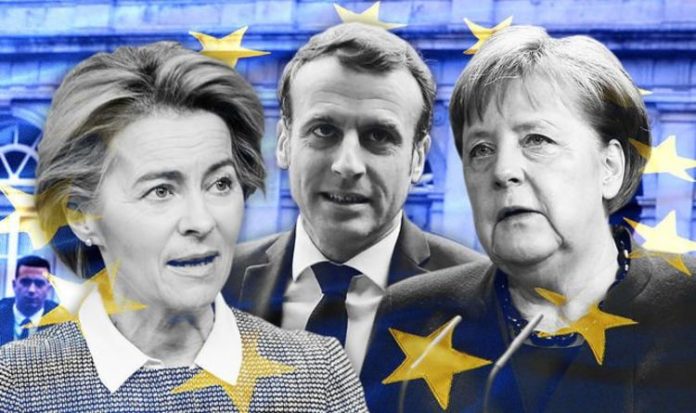 The UK was a major player in the EU, and its departure could lead to a split in Brussels over economic policy and the eurozone. This is according to experts from Carnegie Endowment for International Peace, who believe power could shift towards France and Germany. Erik Brattberg, Kinga Brudzinka and Bernardo Pires de Lima said that this will be countered by other nations forming smaller factions as has previously been seen during disputes over the EU budget. This will culminate in “growing divisions should be expected to surface in the aftermath of Brexit”, they claimed.

The experts said in March: “The UK’s departure leaves enormous political and financial gaps in the EU.

“Power in the bloc will shift toward Germany and especially France led by a dynamic and ambitious President Emmanuel Macron.

“Moreover, the loss of the union’s biggest non-eurozone member will move the centre of gravity more toward the eurozone members, will leave a €75billion hole in the EU budget, and will raise questions about the EU’s future direction.”

Mr Brattberg and his colleagues also warned that smaller countries will try and form regional groups to combat the “Franco-German axis”.

As the case of Sweden highlights, northern EU member states will be especially concerned about Brexit given these countries’ close alignment with Britain on economic policy.

Many of these countries are known as “frugal” nations – in favour of restricted spending while southern member states typically demand investment.

The Carnegie experts added: “In the wake of Brexit, the northern member states are concerned that the orientation of the EU will change.

“They especially fear a stronger drive toward deeper fiscal integration, a notion that the UK acted as a bulwark against.

“A joint eurozone budget and a fiscal union are not popular ideas among non-eurozone countries like Denmark and Sweden.

“Even some northern eurozone countries (like the Netherlands) that are also net contributors to the EU budget express similar sentiments.”

During last April’s negotiations over the coronavirus recovery fund, budget factionalism became a problem in the EU.

President of the European Council Charles Michel also admitted that the negotiation will be “extremely complex” and “the most difficult one ever in EU history because of the Brexit gap”.

David Marsh, a historian who focuses on the eurozone, told Express.co.uk last year that the monetary union in Europe could be threatened by the pandemic.

Mr Brattberg and his colleagues concluded that Brexit leaves a “gaping hole” in the European project, and that signs of cracks forming as a result of the UK’s departure has already been evident.

They said: “Growing divisions are likely to surface. And, if anything, the EU’s handling of its first two major post-Brexit tests—the ongoing negotiations over the next Multiannual Financial Framework (MFF) and the fragmented initial response to the coronavirus outbreak—only reinforces this conclusion.”