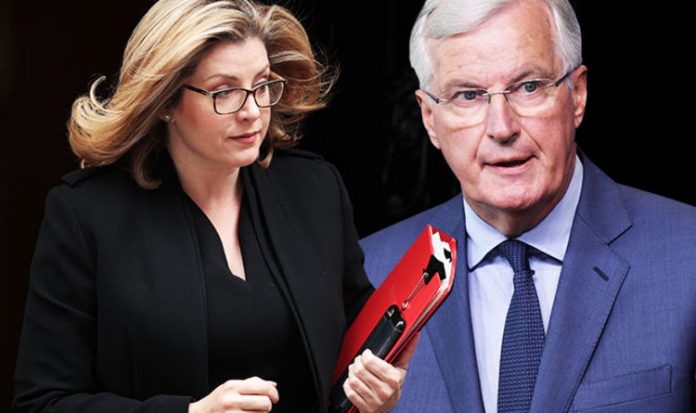 The International Development Secretary was among a number of ministers who rallied round Theresa May after she was humiliated by EU leaders at the Salzburg summit on Wednesday and Thursday.

She said: “Speaking to constituents today, it is clear that EU’s behaviour in recent days is increasing support for us leaving the EU.

“People still want a deal but are content to go without one, even folk who voted remain.”

Ms Mordaunt praised Mrs May’s defiant Downing Street response to the Austrian ambush in which she declared talks had hit an impasse and demanded new proposals and respect from EU leaders.

Her comments were echoed by Foreign Secretary Jeremy Hunt who insisted the EU must end its blanket refusal Mrs May proposals because Britain would not capitulate.

Mr Hunt said people in Britain were increasingly content to leave the bloc without a deal.

He said: “If the EU’s view is that just by saying no to every proposal made by the United Kingdom, we will eventually capitulate and end up either with a Norway option or indeed staying in the EU, if that is there view then they’ve profoundly misjudged he British people.

“We may be polite, but we have a bottom line. And so they need to engage with us now in seriousness.”

SCROLL DOWN FOR LIVE BREXIT UPDATES

9.06am update: France prepared to legislate for no-deal Brexit

French European affairs minister Nathalie Loiseau said her country should get ready for the possibility of a no-deal Brexit and will introduce legislation in November to that effect.

She said: “The British people decided to leave in a referendum, we respect that.

“But this choice cannot lead to the EU going bust, unravelling.

“That’s the message we have tried to send for several months now to our British counterparts, who may have thought we were going to say ‘yes’ to whatever deal they came up with.”