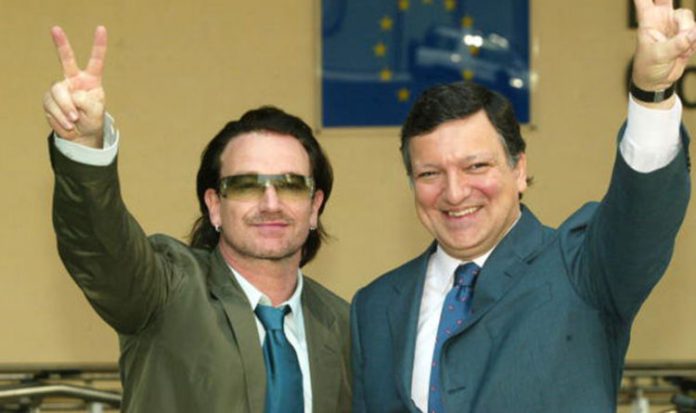 Demanding we all seek the same “uplifting, positive vision” of he EU he told the with the Washington Post: “Europe needs to go from being seen as a bore, a bureaucracy, a technical project, to being what it is; a grand, inspiring idea”.

The pro-EU veteran rocker has been using his fame to subject Britons to his options on the bloc by unfurling a giant EU flag at his concerts – whether fans voted for Brexit or not.

Desperate to have his say in European politics, he has even penned his own articles in an array of newspapers from Brussels’ member states, including a piece in German newspaper Frankfurter Allgemeine that read that “Europe is a thought that needs to become a feeling”.

On the subject of populism, he told the US publication: “I love our differences, our dialects, our traditions, our peculiarities.

“And I believe they still leave room for what Churchill called an ‘enlarged patriotism’; plural allegiances, layered identities, to be Irish and European, German and European, not either/or.”

He added: “The word patriotism has been stolen from us by nationalists and extremists who demand uniformity. But real patriots seek unity above homogeneity. Reaffirming that is, to me, the real European project.”

Irish rocker Bono’s words may have been touching to some, yet the title of the interview ‘I wanted to understand Europe’s populism. So I talked to Bono’ has been doing the rounds on social media after Mr Neil hilariously mocked the Irishman, hinting he knows nothing about ordinary folk at the bottom of the food chain.

Mr Neil wrote: “I wanted to learn more about the benefits of diversity, racial and ethnic harmony — and Islam as a religion of peace. So I talked to Tommy Robinson.”

This prompted a flurry of other replies from Mr Neil’s thousands of followers.

One said: “I wanted to learn how to change a tire. So I talked to Michael Bloomberg.”

Another said: “I wanted to leave the EU so I voted for Theresa May.”

Another added: “I wanted to understand how to shelter money in a tax haven and pontificate about poverty. So I talked to Bono too.”