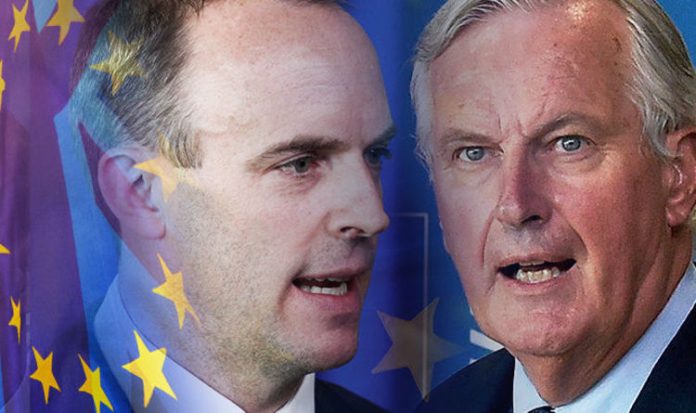 The UK is set to leave the European Union on March 29, 2019 but no agreement on the future relationship between the two sides has been decided.

The EU’s chief Brexit negotiator Michel Barnier this week ruled out a deal being agreed before a European Council summit on October 16.

In his speech as the documents are published, he is expected to say a good deal is close but “we have a duty, as a responsible government, to plan for every eventuality”.

Mr Raab is expected to say that many of the “challenges” presented by a no deal would also affect the European Union, adding: “For our part, if the negotiations fail, we will continue to behave as responsible European neighbours, partners and allies.”

Fears about the chaotic impacts a no-deal Brexit could have on the UK have been expressed by Foreign Secretary Jeremy Hunt and Bank of England Governor Mark Carney, as well as police chiefs, groups representing hospitals and ambulances, and the farmers’ union.

But Dominic Raab has attempted to calm fears, and said in a press conference alongside Mr Barnier on Tuesday: “As you will see when we set out our plans, some of these hair-raising scare stories are very far from the truth and I look forward to explaining the context on Thursday.”

See our live blog below for our latest updates on Brexit:

Brexit: Dominic Raab will present advice on how to plan for the possibility of a no-deal outcome (Image: GETTY)

9.25am update: UK to impose duties and treat member states like ‘third countries’ in the event of no deal

British businesses will have to declare all imports from the continent and pay customs duties, also treating EU nations as “third countries” after a no deal Brexit, The Daily Telegraph has learned.

One of the papers Brexit Secretary Dominic Raab will pesent in Westminster today, which advises people and businesses on a no-deal scenario, will be on customs and excise.

According to industry sources, it states that firms will have to apply the same customs procedures as they do “when importing goods from a country outside the EU”.

It states: “This means that for goods entering the UK from the EU an import declaration will be required. Customs checks may be carried out and any customs duties must be paid.”

9.10am update: Raab will warn Brussels to do the “respnsible thing” in relationship on no-deal Brexit

Dominic Raab will warn the EU that it must to the “responsible thing” in working with Britain on arrangements for a no deal Brexit.

In his speech briefing Westminster on the relase of the first of more than 80 preparedness notices, the Brexit Secretary will say that in some aras, the UK will take “unilateral” action to ensure as much continuity as possible, “irrespective of whether the EU reciprocates”.

But he will add that in some areas there must be “necessary engagement” on planning for a no deal Brexit.

Mr Raab will say: “In some cases, it means taking unilateral action to maintain as much continuity as possible in the short term, in the event of no deal — irrespective of whether the EU reciprocates.

“Of course, while we may take that approach in the short-term, we will be outside the EU, and free to diverge when we are ready, on our terms, in the UK national interest, and when it’s right for the British people.”

Brexit news: Theresa May has been told by Jacob Rees-Mogg to “chuck Chequers” (Image: GETTY)

David Grossman, a BBC technology journalist, claimed Brexit supporting Conservative MPs are worried that the Governments is planning to use a series of technical notices giving advice on a no-deal Brexit, the first of which will be issued today, to scare both their Parliamentary colleagues and the public into accepting May’s Chequers deal.

He said: “There is squirt amongst some in the Conservative Party that these no deal Brexit technical papers will be used to scare both them and the public into supporting Theresa May’s compromises in the so-called Chequers plan.”

The British Chambers of Commerce claimed businesses had “waited too long for answers to some basic questions around Brexit” and had been “particularly frustrated by the lack of clear guidance”.

“Do firms now have the clarity they need so that they can continue to conduct business both here at home and across borders on March 30, 2019?”

Labour leader Jeremy Corbyn has insisted there is an “absolutely massive” difference between the Brexit policies of Labour and those of the Conservatives.

Speaking in Glasgow on Wednesday, Mr Corbyn said: “There’s a massive difference because we are not looking for a no-deal Brexit as many Tory MPs are.

“We’re not looking to do a deregulatory sweetheart deal with Donald Trump.

“We’re looking instead for an economy that invests for the future, gives rights at work, consumer rights, and environmental protection to everybody in our society.

“The difference between Labour and the Tories is absolutely massive on this.”

8.30am update: Rees-Mogg calls on May to “chuck Chequers”

Brexiteer Jacob Rees-Mogg has implored Theresa May to “chuck Chequers” and “believe in Britain” in his latest bid to spearhead a Brexiteer revolt in the Commons.

Writing in a letter addressed to grassroots Conservatives, Mr Rees-Mogg described the Prime Minister’s Chequers plans as the “wrong deal for Britain”.

In the letter, leaked to the Daily Telegraph, Mr Rees-Mogg said: “The Government would be wrong to be fearful of Britain enjoying an independent future.

“Theresa May’s Chequers proposals would shackle us to the EU forever.

“We would be out of Europe yet still run by Europe.

“This is why the Prime Minister should ‘chuck Chequers’ and instead seek a Canada-style free trade agreement with the EU to make the most of the global opportunities that lie ahead.

“It is time the Government realised that the EU stands to lose much from no deal being agreed and stopped being cowed by the EU’s threats.

“It is time to face down vested interests in the establishment and put democracy first.

“Yet most of all, it is time ‘to chuck Chequers’, respect the referendum, be out of Europe, take back control and believe in Britain.”

The government is publishing advice about how to plan for the possibility of a no-deal Brexit in order to tackle “hair-raising scare stories”.

Brexit Secretary Dominic Raab, who will brief Westminster on more than 80 UK no-deal preparedness notices, is expected to say a good deal is in sight but “we have a duty, as a repsonsible government, to plan for every eventuality”.

Mr Raab is expected to say that many of the “challenges” presented by a no deal would also affect the EU, adding: “For our part, if the negotiations fail, we will continue to behave as responsible European neighbours, partners and allies.”