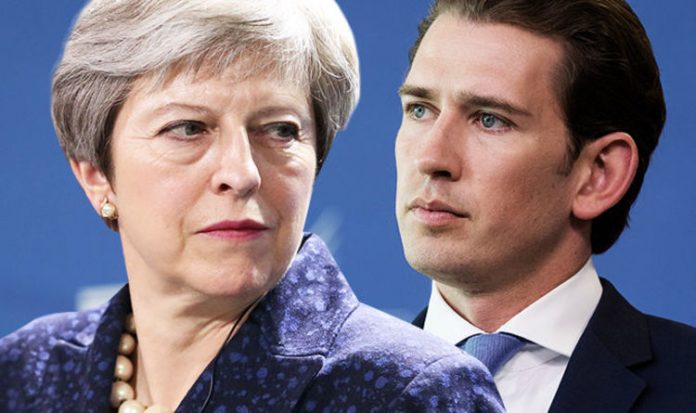 Neither eurocrats nor member states have accepted Mrs May’s request to add Brexit to the agenda for the summit in Salzburg on September 20.

Downing Street insists Austrian leader Sebastian Kurz, who is hosting the summit, has agreed for Brexit to be at the top of the agenda.

However, no such message has been heard from Austria, and EU Council chief Donald Tusk remains undecided.

An EU ambassador said leaders would be unimpressed if the Prime Minister fails to present a fresh idea to the table.

They told the Sun: “The suggestion was done by the British side. It has not been commented on by Mr Tusk nor by any other EU leader.

“Kurz has not accepted that at all or acknowledged it, he just took note of this wish by the British prime minister.

“We don’t know what we should be discussing in Salzburg. We haven’t got a clue because there’s nothing on the table. It’s not on the agenda.”

UK officials stand their ground and say Mr Kurz “confirmed” to Mrs May that Brexit would be added to the agenda after their meeting on July 27.

The informal meeting next month could be a way for Mrs May to sell her Chequers plan vision directly to leaders.