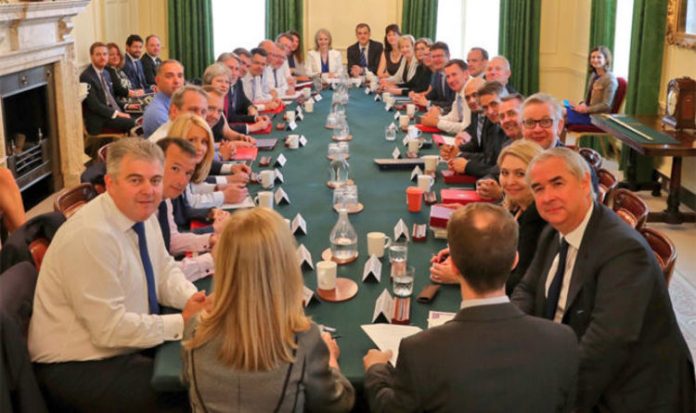 With less than nine months until Britain is due to leave the EU, May has been wrestling with how to enact Brexit without jeopardising business with the world’s biggest trading bloc of 27 countries whilst forging new global deals.

Her plan for a “a business-friendly” Brexit prompted the resignations of Foreign Secretary Boris Johnson last night and Brexit Secretary David Davis on Sunday.

But despite this, sterling rebounded as investors bet she would not face an immediate challenge to her leadership.

Follow below for LIVE UPDATES as Theresa May unveils her reshuffled Cabinet:

10:27am update: May unveils her reshuffled Cabinet

The Prime Minister has tweeted a picture of her reshuffled Cabinet following a meeting this morning.

Alongside the picture, Mrs May wrote:

“Productive Cabinet meeting this morning – looking ahead to a busy week.

“And sending our best wishes to @England for tomorrow!”

9:37am update: Davis says Cabinet meeting at Chequers was an “ambush”

Ooutgoing Brexit Secretary David Davis has reportedly told friends that last week’s meeting at Chequers was an “ambush”, adding he would have had to machine-gun my way out”.

A frinds of Mr Davis told The Times that Mr Davis remarked: “Chequers was an ambush. I would have had to machine-gun my way out.

“If I had resigned I would have called a Daimler and done it in style.”

Mr Davis had threatened to resign on a number of occasions since his appointment as Brexit Secretary after the 2016 referendum.