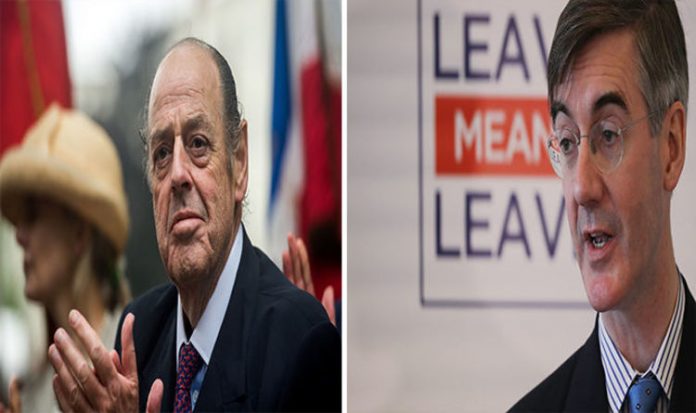 Last night the grandson of William Churchill, the Conservative MP Sir Nicholas Soames, criticised Jacob Rees-Mogg for an “astonishing” letter to the Chairman of local parties, in which he urged them not to support the Prime Minister’s Chequers plan.

Mr Soames, MP for Mid Sussex, expressed his dismay towards his colleague’s decision on Twitter on Thursday, signalling the Tory’s internal divisions on Brexit show no sign of relenting.

The 70-year-old tweeted: “The problem with @Jacob_Rees_Mogg is that people confuse his undoubted fluency and a moderately well cut suit with wisdom but sadly he’s plain wrong #astonishinglettertoConstituencyPartyChairmen”

On Wednesday, Mr Rees-Mogg wrote a letter to local Tory party chairs and his parliamentary colleagues urging them to “chuck Chequers”.

The backbench MP of North East Somerset insisted that the “Chequers proposals would shackle us to the EU forever”.

Mr Rees-Mogg’s comments come two weeks after Theresa May wrote a letter to all Conservative Party members, in which she sought to sell her Chequers proposal as fully adhering to, and honouring, the Brexit referendum result.

Mr Rees-Mogg, however, debunked her letter in a three-page, point-by-point analysis, which he penned to his colleagues.

He also said that Ms May should stand up to “bullying” from Brussels and “believe in Britain”.

The Conservatives are running out of time to negotiate a Brexit deal before Britain’s scheduled departure in March 2019.

Yesterday, Brexit Secretary Dominic Raab, outlined what he described as “practical and proportionate” advice in case the UK crashes out of the EU without a deal.

However, ministers say a deal is the most likely outcome but that “short-term disruption” is possible, if one isn’t ratified soon.

See below for Brexit updates