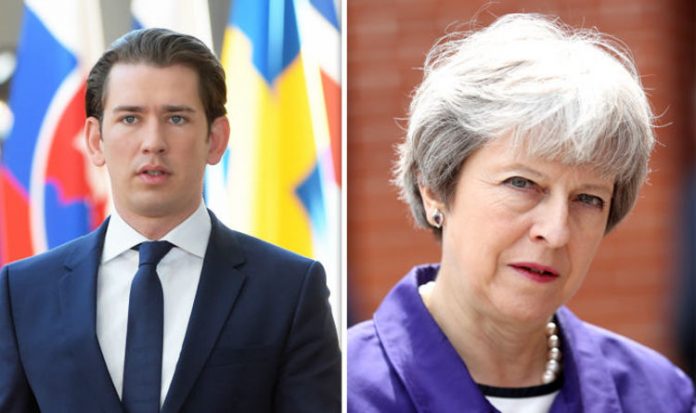 The Austrian Chancellor offered to step in to help the European Commission’s chief Brexit negotiator Michel Barnier as he still has not secured a deal with just seven months to go until Britain leaves.

Talks have hit a deadlock over several key issues including the future of the Irish border and post-Brexit trade ties.

But Mr Kurz, whose country holds the rotating EU presidency, said it was crucial for the UK and EU to reach an agreement and “secure an orderly future together”.

At a rally for German Chancellor Angela Merkel’s party, Mr Kurz said: “Britain’s decision to leave the EU was probably the worst decision of recent years.

“But the decision was taken and now it is about ensuring that contact remains good.

“Britain is militarily, politically and economically tremendously significant on our continent.

“Our big goal is to make a contribution during the presidency so that our chief negotiator, Michel Barnier, can continue to successfully lead the member states together, so that we can bring about a deal with Britain to avoid a hard Brexit and to secure an orderly future together.”

The right winger added that securing a good relationship was important to prevent further Brexit fallout for both Britain and the EU.

Mr Kurz comments, in Erfurt, Germany, came after a meeting with Theresa May in Salzburg last month where he suggested Brexit was “negative”.

Speaking at a press conference with the Prime Minister, he said: “The Brexit decision is a decision we see very negatively.

“But, of course, it has been taken by the British people so now we have to find a way to deal with it.

“From our point of view it is important to avoid a hard Brexit.”

As the documents were released, Brexit Secretary Dominic Raab said the Government “stands ready” for such an outcome.

Mr Rabb vowed to help “manage and mitigate the risks” of a no-deal and “seize the opportunities that lie ahead”.

And he said “lives and livelihoods” in both the EU and UK should be “put ahead of any narrow political interest”.

But the release of the papers sparked a furious response from Labour, who said the documents were “thin on substance and thin on detail”.

In an angry attack, Shadow Brexit secretary Sir Keir Starmer said: “We are eight weeks out from the deadline for reaching an agreement.

“Ministers should be getting on the job of negotiating a Brexit deal that works for Britain, not publishing vague documents that will convince no-one.

“A no-deal Brexit has never been viable and would represent a complete failure of the Government’s negotiating strategy.”