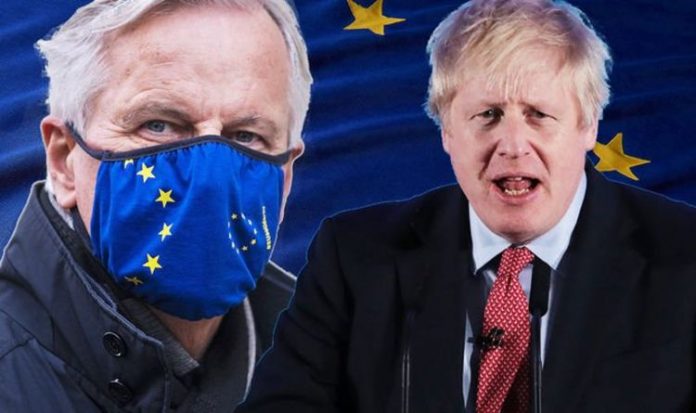 The EU’s chief Brexit negotiator and his British counterpart Lord Frost have until Sunday to come up with a deal after talks over dinner between Prime Minister Boris Johnson and European Commission President Ursula von der Leyen ended without a breakthrough. The leaders agreed that talks should continue in the next few days and that by December 13 a firm decision will need to be taken on the future of the negotiations. Mr Johnson’s team had hoped that a face-to-face meeting with Ms von der Leyen would inject new political momentum into the process but their discussion over a dinner of scallops and turbot in Brussels did not go as smoothly as they had planned.

Ms von der Leyen wrote on Twitter after the meeting: “We understand each other’s positions.

“The teams should immediately reconvene to try to resolve these issues. We will come to a decision by the end of the weekend.”

Major disagreements remain on the so-called level playing field, governance of the deal and fishing rights.

As Brexiteers fear Mr Johnson might be tempted to compromise in order to secure an agreement, in an exclusive interview with Express.co.uk, Alan Winters, director of the Trade Policy Observatory at the University of Sussex, claimed that even if a deal is struck, it might take a long time before the “future relationship” is finalised.

Mr Winters predicted that a series of mini-deals that fall outside the Free Trade Agreement (FTA) will have to be negotiated well after the end of the transition period.

He said: “If we get a deal, we will start negotiating again with the EU on all sorts of things that lie outside the FTA or at least that are in that grey area.

“I think that if we do get a deal now, there will be much more flexibility and we will try to negotiate around the edges.”

Professor Winters added: “I am almost certain that the trade deal will allow us to add new issues into it.

“For example, we will have a provision whereby we haven’t achieved much on business services but we will set up a system that allows us to go back and renegotiate it.

“It will take a while as the politics here are complex.”

He added: “Trade deals like these would have been used by the UK to replace EU products with American ones, for example.

“The UK was therefore left without a weapon at its disposal to speed up the response from Brussels.”

Britain had been closing in on a trade deal with Donald Trump’s administration but Mr Biden has said in a New York Times interview that his priorities will be to improve investment in US manufacturing and the protection of American workers.