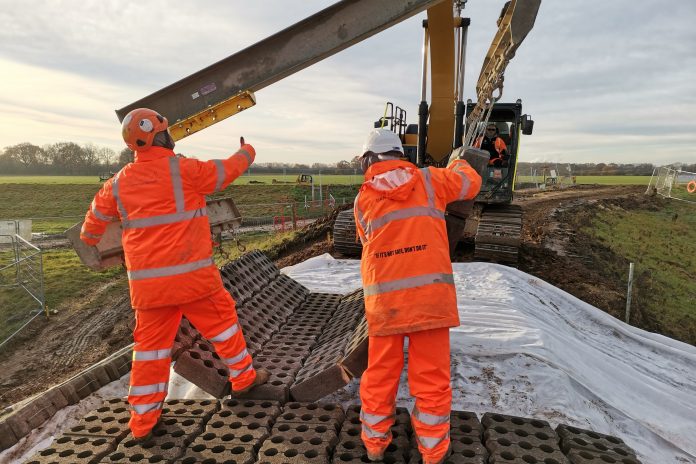 The repairs form part of a £10M package of work that will reduce flood risk to communities across North Yorkshire and the East Riding of Yorkshire including Snaith and Gowdall.

Emergency temporary repairs were carried out in the immediate aftermath of the flooding, but now permanent works at locations across the Lower Aire Washlands will repair the damage caused and strengthen defences.

The latest repairs are being completed at Pick Hill embankment near Snaith and Poor Bank embankment near Gowdall where concrete blocks are being installed to make them more resilient to future scour damage if a similar flood was to happen again.

Poor bank and Pickhill embankments are part of reservoirs that help reduce the flood risk to the communities of Gowdall and Snaith.

It was the wettest February on record for Yorkshire, with the River Aire catchment receiving three and a half times the average monthly rainfall.

The floods had a devastating impact on communities across North Yorkshire, and our thoughts remain with those affected, especially families who still cannot return home.

After the flood water subsided, we inspected defences in the area and found damage at 40 locations. We secured £10 million of funding to make repairs and have been working hard to complete them ahead of winter. Where permanent fixes won’t be complete by spring, we’ve installed temporary measures to ensure local communities are protected this winter.

We can never entirely eliminate the risk of flooding. We encourage people to prepare too, by signing up for Flood Warnings and preparing a flood plan. Further information can be found on GOV.UK.

Since the February floods, the Environment Agency has been working closely with North Yorkshire County Council, East Riding of Yorkshire Council and the Internal Drainage Board to learn from the floods and plan for the future.

Work has been done with communities to help them become better prepared for any risk of flooding, with improvements made to flood warning and informing, and the recruitment of community flood wardens.