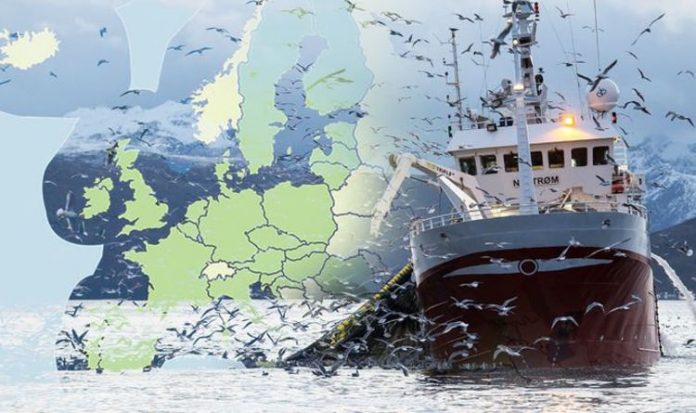 The report comes after 57 MPs from all major parties put their names to a letter calling for the Government to enforce a ban on the enormous vessels entering the zones, known as Marine Preservation Areas (MPAs) after Britain severs ties with the EU at the end of the year. The investigation, undertaken by the environmental pressure group Greenpeace, revealed that while ships such as the Dutch-flagged Margiris, as well as numerous Russian craft, spent 2963 hours fishing in 39 protected areas, in the first six months of 2020, supertrawlers had spent 5590 hours fishing in 19 protected areas.

In total, 23 supertrawlers have been operating in UK waters so far this year – but not a single one of the ships in question is UK-owned, although some are registered here.

Some in the fishing community have even attributed the increase in activity to Britain’s impending departure from the European Union’s Common Fisheries Policy, Greenpeace said.

Chris Thorne, an Oceans Campaigner at Greenpeace UK, said: “Our Government cannot continue to allow supertrawlers to fish with ever increasing intensity in parts of our waters that are supposed to be protected.

“It must step in and put a stop to industrial supertrawler operations within our offshore marine protected areas, something which will be possible after Britain leaves the Common Fisheries Policy.

“Industrial fishing operations have no place in our protected areas.”

Mr Thorne added: “At least 30 percent of the UK’s waters should be off limits to all industrial fishing activity in a network of fully or highly protected marine areas.

Speaking to Express.co.uk earlier this week, Tory MP for North Thanet Sir Roger Gale, who was one of the signatories of the letter, said: “We have this absurd situation where we have these protected zones around our coast but we are not protecting them from the predations of supertrawlers.

“It’s as simple as that – there is no point having protected zones if you don’t protect them.

“These things are huge, massive – they are hoovers.

“I think we need to start taking a firm grip on this now, irrespective of any agreement which might be reached on fishing.

“A lot of these zones are in our waters and these vessels come from all over – Russia, the Netherlands – and they are basically floating fish factories.”

“Yet we seem to be prepared to allow the world and his brother come in hoovering up everything in sight.”

Luke Pollard MP, Shadow Environment Secretary, responding to today’s Greenpeace report on supertrawlers, told Express.co.uk: “The Government needs to step up to properly protect the most sensitive areas of British waters from this industrial scale plunder which is destroying precious biodiversity.

“Labour wants to prevent supertrawlers fishing in UK protected areas. And we’re campaigning for more jobs in our fishing communities, by pushing for more of the fish caught in British waters to be landed in UK ports.”

Former UKIP MEP Mike Hookem agreed in a op-ed published by Express.co.uk today, in which he wrote: “These floating fish factories catch hundreds of tons of fish a day.

“The intensity of this fishing has knock-on effects in the wider marine ecosystem and gives fish populations little room to recover and grow.

“This practice not only harms our waters but also the coastal communities who rely on a healthy fish population for their livelihood.”