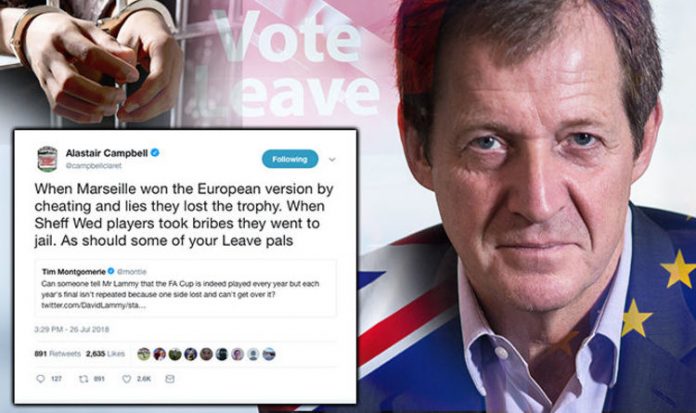 The arch-Remainer, who has more than 430,000 followers on the social network, appeared to compare Brexiteers with Sheffield Wednesday footballers who were jailed for accepting bribes to rig matches in the 1960s.

He tweeted: “When Marseille won the European version by cheating and lies they lost the trophy.

“When Sheff Wed players took bribes they went to jail. As should some of your Leave pals.”

English football was rocked by a rigging scandal in 1964 after Sheffield Wednesday Players Peter Swan,Tony Kay and David “Bronco” Layne were jailed for four months and never played professionally in the country again.

They had agreed to place £50 bets on odds of 2-1 that their side would lose to Ipswich Town in December 1962, after being approached by Scottish youth international David Layne.

Many of Twitter responded with fury at the former Labour Party chief’s comments.

@Paul_Hemmer said: “Can we have a re run of the elections new labour won? Was more than a few lies and spin getting thrown around then. Of which you were a part of.”

@GeneralBurk said: “Both sides lied. You lied to start a war for oil resulting in the deaths of thousands. You have no validity.”

@LengofRichardIII wrote: “Right that’s it, this MUST be a parody account. The real AC couldn’t possibly have this much brass neck.”

The spin doctor’s comments come after he waded into a row between political activist Tim Montgomerie and Labour’s David Lammy over a second Brexit referendum.

The row erupted after Mr Montgomerie mocked Tottenham and Labour MP Mr Lammy for calling for a second Brexit vote.

He posted: “Can someone tell Mr Lammy that the FA Cup is indeed played every year but each year’s final isn’t repeated because one side lost and can’t get over it?

“I’d like to re-run this year’s FA Cup Final, too, again and again, until Man Utd win it.”

Mr Lammy has joined with Conservative MP Anna Soubry in leading calls for Britain to have a People’s Vote on leaving the European Union.

But Prime Minister Theresa May has ruled out a second referendum and Labour leader Jeremy Corbyn has not supported the prospect of another vote.