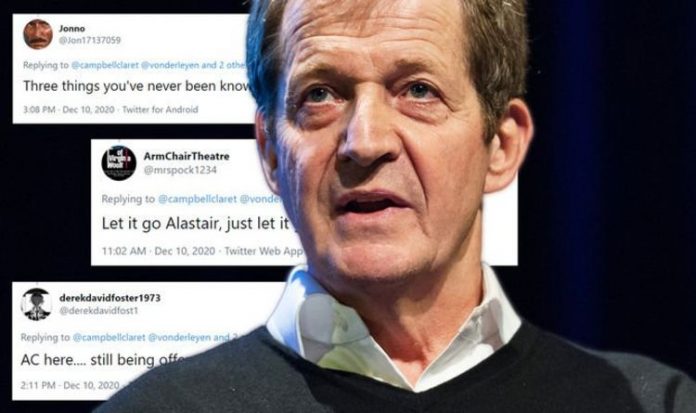 Despite the UK voting to leave the EU four years ago, Tony Blair’s former chief of staff couldn’t resist a bitter swipe at Mr Johnson. Following the release of the EU’s no deal contingency plan this morning, Mr Campbell praised Brussels for its “good grace”. Despite both sides failing to agree a deal as of yet, Mr Campbell labelled the Prime Minister’s handling of the Brexit talks as “incompetent”.

In a tweet, he said: “The good grace, patience and professionalism which the EU team especially.

“Ursula von der Leyen and Michel Barnier have shown in the face of the lies, gaslighting and incompetence of the Boris Johnson team has been very striking.”

However, given the critical juncture the UK and EU currently face, many took to social media to criticise his comments.

A third added: “Campbell here, still being offended by democracy!”

Another wrote: “Good grace and professionalism from the EU?

“They are demonstrating everything that is wrong with it!

JUST IN: Don’t think about it! EU to STOP member states from signing deals

Within the document lies a series of short-term deals on certain sectors such as fisheries and transportation.

As stated by the EU, a six-month proposal has been put forward in order to maintain air services.

On the contested issue of fisheries, Brussels also put forward a regulatory framework which would last until December 31, 2021.

However, this would end if a fisheries agreement is signed between the two sides.

“However, given that the end of the transition is very near, there is no guarantee that if and when an agreement is found, it can enter into force on time.

“Our responsibility is to be prepared for all eventualities, including not having a deal in place with the UK on 1 January 2021.

“That is why we are coming forward with these measures today”.