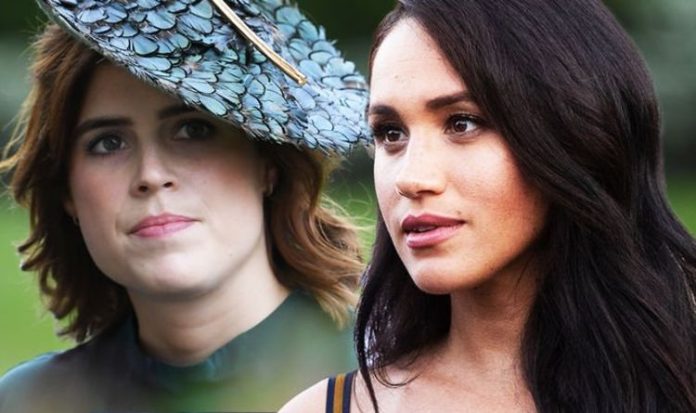 Eugenie and her husband Jack Brooksbank recently moved into Meghan and Prince Harry’s former home at Frogmore Cottage. The Grade II listed building was vacated by the Duke and Duchess of Sussex in January this year after the pair announced they would split from Royal Family life and move to the US. As Eugenie and Jack begin to carve a family and future of their own together – the pair announced in September that they are expecting their first child next year – reports have resurfaced of Eugenie and Meghan’s relationship having previously declined.

Eugenie and Jack married in October 2018, five months after Meghan and Harry’s wedding.

On her big day, however, Meghan announced that she and Harry were expecting a baby.

According to royal authors Omid Scobie and Carolyn Durand, the decision “did not go down particularly well” with Eugenie.

So angry was Eugenie, that she is reported to have “disappeared” at her own wedding after Meghan and Harry “put her nose out of joint” with their revelation.

Sarah Ferguson, Eugenie’s mother, was said to have been furious at the move.

When Kensington Palace announced on Twitter that Meghan and Harry were expecting a child, Sarah quickly posted a series of tweets congratulating her daughter and Jack on their wedding day.

It was a move perceived by many as a swipe at the Duke and Duchess of Sussex, attempting to obscure their news.

Despite this, a source close to the Royal Family told the Daily Mirror at the time that Eugenie and Jack were “thrilled for them both” when told about the baby.

JUST IN: Andrew ‘rubbed up wrong way’ by Charles’ entitlement to the throne

In the sympathetic biography Finding Freedom, authors Mr Scobie and Ms Durand detail how the cousins were “the closest of friends”.

Eugenie “welcomed Meghan enthusiastically” when she and Harry went public with their relationship.

It has been reported that the Princess was one of the first to find out about the romance, having “told friends she loved Meghan”, adding that she was “just the tonic” for Harry.

The princess had “long wanted to see her cousin settle down and be happy”, the book claims.

Meanwhile, according to Meghan and Harry’s office, Frogmore Cottage will remain the Sussexes “residence in the UK”.

A source said that Harry and Meghan “are delighted to be able to open up their home to Princess Eugenie and Jack Brooksbank as they start their own family”.

While the Duke and Duchess are not expected to return to the UK very often, they will stay at Frogmore when they do.

Eugenie and Jack currently live in one of the residences at Kensington Palace in London.

Windsor Castle, which the cottage is a stone’s throw away from, is said to have a place in Eugenie’s heart.

She spent a lot of time there as a child, and even married Jack at St George’s Chapel at Windsor Castle.