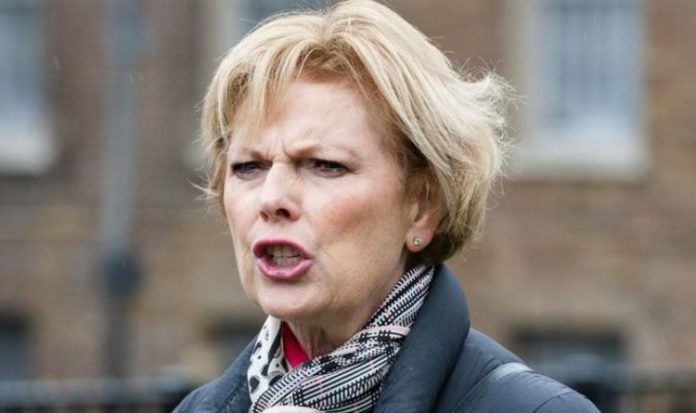 Ms Soubry has been a staunch critic of the UK’s departure from the EU and on Twitter, the former Leader of the Independent Group for Change insisted Britain must not leave the bloc due to the consequences of the coronavirus pandemic. In a tweet, she said: “Not exactly the best of times to be walking away from the world’s biggest free trade area.” Ms Soubry made the comment in reference to a separate tweet from fellow former Tory MP, Nick Boles, who highlighted a graph indicating the UK’s slow economic recovery in comparison to Germany, France, Italy and Spain.

Like many other economies, the UK has suffered a sharp economic decline due to the coronavirus.

Economists at the Bank of England have indicated the country may see a V-shaped recovery later in the year due to some of the economic provisions put in place.

While the UK’s economy may not be as strong as it had been prior to the outbreak, the Bank of England’s chief economist, Andy Haldane, claimed it is now recovering quicker than first thought.

In an editorial piece for the Daily Mail, he claimed the economy is “not falling like a stone”.

He wrote: “Economic activity in the UK is not falling like a stone.

Previously, Ms Soubry warned of a no deal Brexit prior to the deadline to extend the transition period on June 30.

In a separate tweet at the time, she accused those in the Leave camp of “lying to the country”.

JUST IN: How Tory MP exposed plot to stop Britain’s departure from EU

Brexit talks reconvened this week as the two sides look to agree a trade deal by the autumn.

Prior to talks resuming, a EU Commission spokesman insisted a deal must be agreed by October at the latest.

The EU’s chief negotiator, Michel Barnier, insisted the deal must be agreed in this short timeframe in order for it be ratified by the EU 27.

With the two sides locked on several areas of divergence including fisheries and state aid, a spokesman for the Prime Minister insisted No 10 was still confident of securing a deal.

The spokesman insisted the UK would look to settle the differences as talks resume today.

Brussels has also rejected the UK’s demands for continued access to the EU for British truckers.

UK road haulage groups have warned any failure to strike a deal could hurt businesses on both side of the Channel.

A person briefed on the talks said: “The commission view is that the UK request is fundamentally unbalanced and would give rights to UK hauliers that are extremely close to single market membership.

“We cannot allow the UK to maintain pretty much the same access as it has today.”