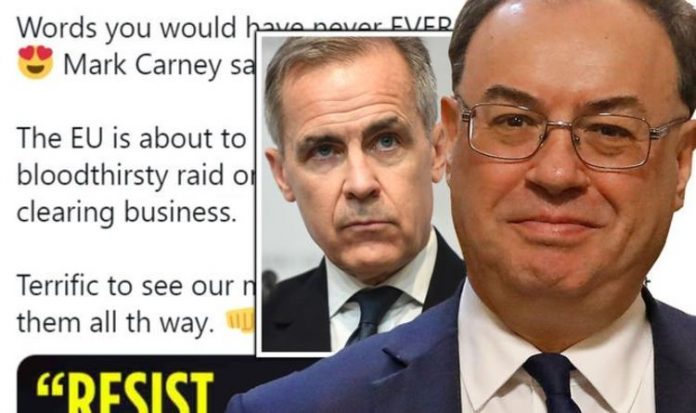 Bank of England boss Andrew Bailey branded Brussels’ tactics “very controversial” and warned they were of “dubious legality”. Brexiteers have welcomed Mr Bailey’s tough stance and took a swipe at his predecessor at the Bank of England, Mark Carney.

The Leave.EU campaign tweeted: “Words you would have never EVER hear EU-loving Mark Carney say.

“The EU is about to show its true colours (again) with a bloodthirsty raid on the City of London’s thriving clearing business.

“Terrific to see our man at the BoE wants us to fight them all the way.”

The EU wants to force financial institutions to stop clearing derivatives in the City of London which continues to dominate derivatives clearing in euros despite Britain’s departure from the bloc last December.

Clearinghouses perform the vital function of ensuring trillions of pounds’ worth of transactions are made safely and London’s market is worth £658trillion.

Brussels is now drawing up plans to ensure the euro-dominated business takes place in the EU despite severe doubts it has the infrastructure or capacity to do so within its scattered network of smaller financial centres such as Dublin, Paris and Frankfurt.

A deal that recognises Britain’s clearing standards are equivalent to the EU’s expires in June 2022, after which Brussels can remove equivalence and bring over the business.

Such a move would see 25 percent of trade move from London but Brussels bosses have made it clear they also have their sights on the remaining 75 percent.

Mr Bailey told the Commons Treasury Select Committee the EU would be unhappy with just a quarter of the City’s business.

He said: “The efficiency really comes from having a very big pool of derivatives that can be netted and cleared down.

“By splitting that pool up, the whole process becomes less efficient, and having the smaller part of the pool is even less efficient.”

And he warned Brussels was planning aggressive new rules which would see financial institutions operating in Britain faced with extraterritorial legislation and penalties obliging them to move across the Channel.

He said: “To get that by fiat would require something very controversial such as an attempt at extraterritorial legislation, or an attempt to force or cajole banks and dealers to say there will be some other penalty for you unless you move this clearing activity into the eurozone.

“Quite bluntly, that would be highly controversial and it would be something we would have to and want to resist very firmly.”

City of London chiefs have already warned Brussels is gaining the upper hand in negotiations over the amount of access the Square Mile will be given to the European market – with one expert claiming he sees “no likelihood of an equivalence deal”.

The UK has yet to be granted the equivalence status on financial services regulation that would free up trade because the EU says it needs more information about Britain’s intentions to diverge from the bloc’s rules.

Britain insists it has supplied all the necessary paperwork and described the City as “one of the world’s most pre-eminent financial centres, with a strong regulatory system”.

But analysts warn the EU is no rush to complete a deal now Amsterdam has overtaken London as Europe’s biggest share trading centre.

EU authorities have previously been clear they want euro-denominated financial activity shifted from London to build up its own capital market under direct Brussels supervision.

And their position has been strengthened as London’s major European rivals appear to have taken advantage of the Brexit deal’s failure to secure regulatory equivalence.