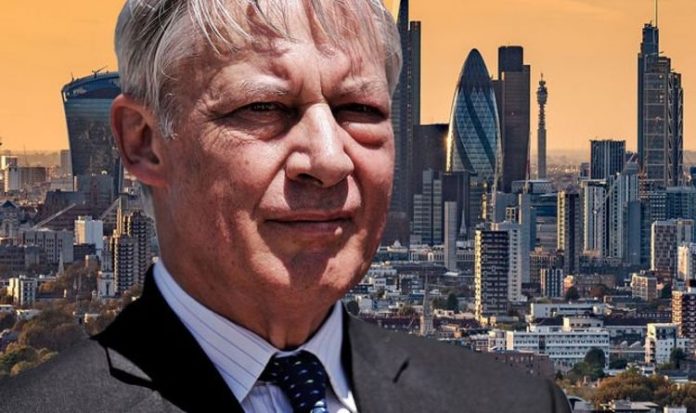 France’s decade-long dream to sideline the City of London still has a long road ahead. In 2012, the former Governor of the Bank of France, Christian Noyer, laid out a plan to strip London of its status as Europe’s main financial hub as he called for the City to be sidelined. His aim was to bypass London so the eurozone could “control” transactions within the 17-nation bloc.

Mr Noyer said there was “no rationale” for allowing the eurozone’s financial centre to be “offshore”.

“We’re not against some business being done in London, but the bulk of the business should be under our control.

“That’s the consequence of the choice by the UK to remain outside the euro area.”

But even today, amid claims Amsterdam has “usurped” the City, his vision seems a long way off.

Shares worth €9.2billion (£8.07bn) a day were traded on Euronext Amsterdam and the Dutch arms of CBOE Europe and Turquoise in January, a more than fourfold increase from December.

Dream on! Bank of France chief laid out plan to topple City of London before Brexit (Image: GETTY)

Meanwhile, volumes in London fell sharply to €8.6billion (£7.5bn), causing the City of London to lose its historic position as the main centre for the European market, according to data from CBOE Europe.

The shift is a direct consequence of the EU banning its financial institutions trading in London, as Brussels refuses to recognise most UK regulatory systems as equivalent to its own post-Brexit.

Paris and Dublin also gained in trade volume last month but not as much as Amsterdam.

However, according to William Wright, founder of think tank New Financial, European financial centres should not get too excited, as London’s supremacy in the financial sector is likely to remain.

He explained: “This shift is one of the very areas where Brexit has a binary/mechanical impact: inside the EU, trading in EU shares could take place in London; outside the EU with no equivalence for stock exchanges, it can’t. So it had to move and has moved.

“The numbers look big but the economic impact (at least for now) is limited. Back of the envelope estimate: €6.5billion (£5.7bn) in daily trading volumes in EU equity trading switching from London translates into maybe £50million in annual revenues, max £5million in lost tax. Probably less.”

Mr Noyer’s broadside was one of several outspoken public attacks launched by French leaders on Britain at the time.

Shortly before Standard and Poor’s stripped France of its AAA credit rating earlier that year, Mr Noyer said Britain’s rating should have been cut before that of France as the UK had “as much debt, more inflation, less growth than us”.

The main accusation appeared to be that the former French minister was more likely to side with then President Nicolas Sarkozy than he was with the leaders of London’s under-pressure finance sector.

As the Daily Telegraph put it, “the Frenchman was seen as a threat”.

The UK’s fears appear to have been justified, too.

That nervousness reportedly burst into the open, with David Cameron moaning about the City being “constantly under attack”.

For the former Prime Minister – and figures from the UK’s financial industry – the problem was not one single issue but rather a worrying trend.

Anthony Belchambers, chief executive of the London-based Futures and Options Association told the publication at the time: “Red tape, ill-informed tax initiatives, protectionist policies and high ‘pass on’ costs will damage the international reach of the City.”

Mr Barker also pointed out that the underlying alarm in London was a more visceral fear; that Mr Barnier and his backers had been using the regulatory system to sap London’s strength as Europe’s financial centre.

The EU correspondent wrote: “Already, rivals such as Paris and Frankfurt are on the march.

Mr Barnier always dismissed complaints against him as “nonsense”.

However, in the Brexit trade deal agreed on Christmas Eve – a document spanning over 1,200 pages – there was very little mention of financial services: a sector which accounts for seven percent of the UK’s economy and 10 percent of its tax receipts.

According to Lee Rotherham, the former director of Special Projects at Vote Leave, there is a simple explanation why the deal did not include an arrangement for financial services.

He wrote in a report seen exclusively by Express.co.uk: “Overall, the services section seems like an average FTA, enabling activity up to a point.

“It is worth remembering that of the so-called ‘Four Freedoms’, [Services] is the area that was least pursued by the EU.”