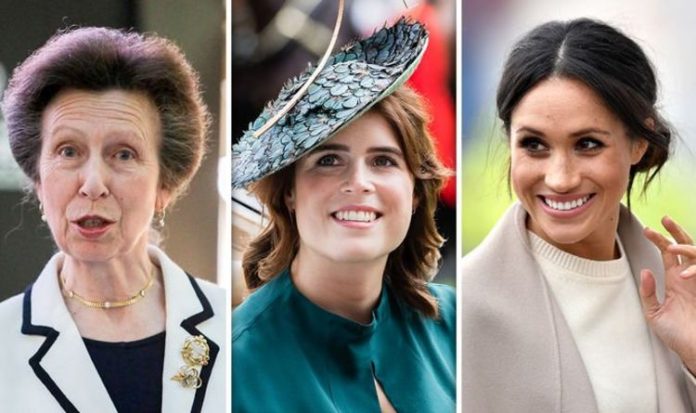 However, one thing is already sure ‒ that he will not be a Prince, have the His Royal Highness (HRH) title or any other title for that matter. Instead, Eugenie’s son will take his father’s surname of Brooksbank. In this way, Eugenie is following in the footsteps of Princess Anne, whose children Peter and Zara have no titles and took their father’s name of Phillips.

Similarly, Meghan Markle and Prince Harry’s son does not have a title, but has the family name of Mountbatten-Windsor.

This means grandchildren in the female line are not entitled to HRH.

However, the Queen can dish out courtesy titles by offering the husband of female descendents a dukedom or earldom.

This would mean their children would have the titles appropriate for the child of a duke or earl.

It is believed the Queen offered Anne and her husband Mark Phillips a courtesy title, but they declined, hence Zara and Peter have no titles.

Eugenie’s husband Jack Brooksbank did not take a title either, and so neither will his son.

Similarly, Harry’s son Archie was not entitled to be HRH, but he was entitled to have a title appropriate for the son of a Duke, although the couple decided against this.

Princess Anne has always been a distinctly private person, preferring to keep her public and personal lives very separate.

She had a difficult relationship with the press when she was young, because she felt they should not be asking her questions about relationships, among other things.

However, as time has gone on, she has arisen as one of the most successful royals.

Her decision not to give her children titles has also given them the opportunity to live a more private life.

Similarly, the Duke and Duchess of Sussex have spoken many times about their desire to live without public and press intrusion.

It was reportedly one of the reasons they decided to step down as senior royals and move to the US.

Working to become financially independent is one way to achieve privacy, as they will become purely private citizens, who are no longer taking from the public purse.

They also decided not to give Archie a title, in line with Anne’s thinking that this will help him have a more normal life.

Meghan and Harry also followed in Anne’s footsteps in boycotting the use of royal nannies.

Instead of hiring the usual nannies from Norland College, they opted for one outside the royal sphere.

It appears Eugenie and Jack may also by hoping for a level of privacy for their son.

Jack not accepting a title means their baby will not receive one either.

What’s more, the couple have moved into Frogmore House, the very place where Meghan and Harry hoped to retreat and have some privacy for their little family.

However, it may well be that Eugenie finds it easier to make a success of it while staying in the Royal Family, simply because she is further down the line of succession than Harry.

There have been a number of Letters Patent issued since George V’s in 1917 that affect title inheritance.

In 1948, King George VI issued Letters Patent just before Prince Charles’ birth because the 1917 decree excluded the children of the Queen, then Princess Elizabeth, from taking a royal style and title.

The King declared that the children of Princess Elizabeth and the Duke of Edinburgh should “hold the style, title or attitude of Royal Highness and the titular dignity of Prince or Princess prefixed to their respective Christian names”.

In 1996, the Queen issued Letters Patent which removed the title HRH from former wives, meaning Diana, Princess of Wales and Sarah, Duchess of York, were no longer HRH after their divorces.

This is why Princess Charlotte and Prince Louis have their titles.