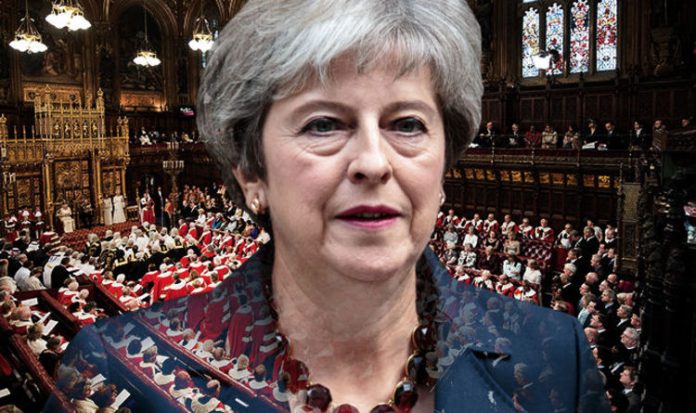 The unelected peers will attempt to put down amendments to the Trade Bill to try to reopen attempts to force Britain to stay in a customs union with the EU.

Previous attempts by peers to keep the UK in a customs union have failed.

If successful it will prevent Britain from having its own free trade deals or its own trade policy but instead have to accept rules from Brussels.

It could also mean that the UK may be forced to accept free movement and uncontrolled immigration.

The audacious attempt comes because members of the Lords are unable to amend the taxation (cross-border trade) bill where Tory Brexiteers led by Jacob Rees-Mogg successfully managed to outlaw attempts to keep Northern Ireland in the EU’s customs union separate from the rest of the UK.

This bill is un-amendable under parliamentary procedure because it is designated an “aids and supply bill”.

But Labour believe that they can unpick it through the trade bill with the help of Tory, Lib Dem and cross bench Remainers who dominate the Lords.

Labour’s leader in the Lords Baroness Smith said she would work with “all parties and none” to ensure Brexit legislation was “fit for purpose”.

She said: “As we did with the withdrawal bill, our frontbench team in the Lords are working with peers from across the house, from all parties and none, to ensure Brexit related legislation is fit for purpose.

READ  Euromillions results: What are the winning numbers for Friday? | UK | News (Reports)

“Given the current state of the negotiations with the EU, we are again looking to give MPs a meaningful role in ensuring the best outcome – and have tabled an amendment to put a customs union back on the table.

“The government’s desperate tactics meanwhile to accept [Brexiteer] amendments to the taxation bill stopped any effective debate in the Commons.

“So, we have also tabled new amendments to ensure ministers can’t duck scrutiny on such key issues.”