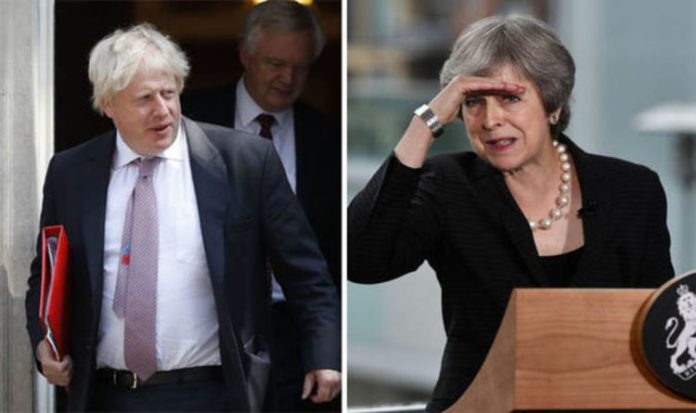 In comparison just 16 per cent have confidence in Mrs May negotiating Brexit.

Meanwhile, the same survey reveals that Labour’s lead in the polls would disappear if Mr Johnson was Prime Minister.

The figures amid allegations that Chancellor Philip Hammond – dubbed the heart of Remain in the cabinet – has been telling his friends that he is delighted the “bogeyman” Mr Johnson has resigned as foreign secretary along with former Brexit secretary David Davis.

Mr Hammond, who has been accused of trying to frustrate a proper Brexit and water it down, is said to have told friends that the “upside” of Theresa May’s much criticised soft Brexit plan from Chequers is that “the two main bogeymen have been taken off the board.”

Mr Johnson and Mr Davis resigned as a matter of principle because Mrs May had abandoned her red lines on the Brexit negotiations effectively tying Britain to EU rules and even leaving the door open to free movement of people.

The Yougov findings commissioned by the Sunday Times will not make happy reading for Mrs May with the public strongly backing herm former foreign secretary and leading Brexiteer Jacob Rees Mogg.

Mrs May’s Chequers’ deal only received 11 per cent of the support of the 1,668 adults polled compared to 38 per cent supporting no deal.

There was evidence of growing disquiet with the current political parties.

The YouGov survey showed that 38 per cent would vote for a new party on the right that was committed to Brexit, and 24 per cent would be prepared to back an explicitly anti-immigrant, anti-Islam party.

With Lib Dem leader Sir Vince Cable admitting that he had attended a dinner to set up a new pro-Remain, centrist party when he missed a crucuial vote last week, the poll revealed that around 33 per cent would support a new anti-Brexit centrist party.