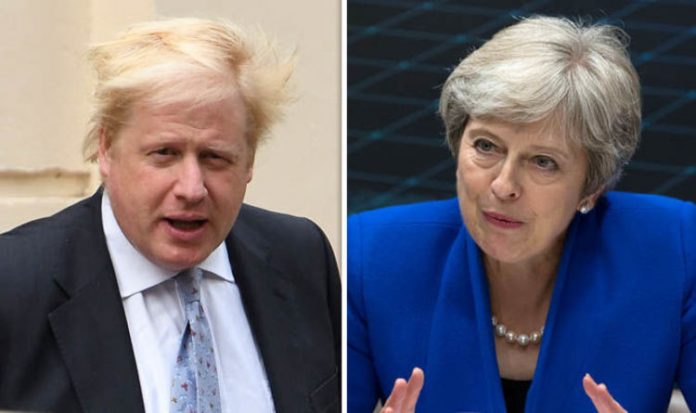 In a fresh attack on the Prime Minister, the former foreign secretary described her so-called “Chequers” proposals as “substantially worse than the status quo” for UK businesses.

He also indicated his readiness to join a united Eurosceptic front against Downing Street by lining up with other senior Tories to back a report highlighting the potential benefits for Britain of quitting the EU without a deal.

Mr Johnson made a surprise appearance at Westminster at the launch of a pamphlet calling for a “World Trade Deal” published by the Economists for Free Trade group.

Other leading Tory Eurosceptics including the senior MP Jacob Rees-Mogg and former EU Exit Secretary David Davis were also at the launch held in a Commons committee room.

The report argued that the UK could enjoy a sustained economic boost by adopting a relationship with the EU based on the existing World Trade Organisation rules rather than negotiating a new trade deal.

Mr Johnson said Economists for Free Trade were right to warn that Mrs May’s Brexit plan, agreed by the Cabinet at her Chequers country retreat in July, would turn the UK into a “vassal state” forced to accept EU regulations without a say.

“It seems to me there is also this particular economic objection that in abandoning our seat around the table in Brussels and continuing to accept the single market legislation, the Ruislip and South Uxbridge MP said.

“We will be exposing UK businesses, manufacturers, entrepreneurs, innovators, to whatsoever rules the EU decides in the future to devise, even though those rules may well be inimical to the interests of UK innovation.

His blast followed a series of scathing attacks on the Prime Minister’s plans in recent days, including likening her Chequers proposals to putting a “suicide vest” around the British constitution.

“Is it to be snivelling, and fearful and timorous and give the impression to the EU that we will do whatever they say, that we will kowtow and go down on bended knee and offer to serve homage to the great power that there is within the EU?”

Instead, Britain should show that “we have got nothing to be fearful about”, he said.

As economic analysis showed that Britain could flourish without a deal, the Government should give Brussels the choice between a World Trade Deal or a free-trade arrangement based on Canada’s current largely tariff-free links with the EU.

“Basically, the message is we have nothing to fear but fear itself,” Mr Rees-Mogg added.

The Economist for Free Trade document argued that trade based on World Trade Organisation rules could deliver an £80billion boost to Treasury coffers from increased growth.

Consumer prices could also be cut by around eight per cent, the report added.

Last night, the Prime Minister’s spokesman said the Chequers proposals were “the only serious, credible and negotiable plan which is on the table which both delivers on the will of the British people and which prevents the imposition of a hard border in Northern Ireland”.

At a Lords Commitee, Chancellor Philip Hammond said the economic assumptions behind the Economist for Free Trade analysis were “not sustainable” and out of line with other forecasts.