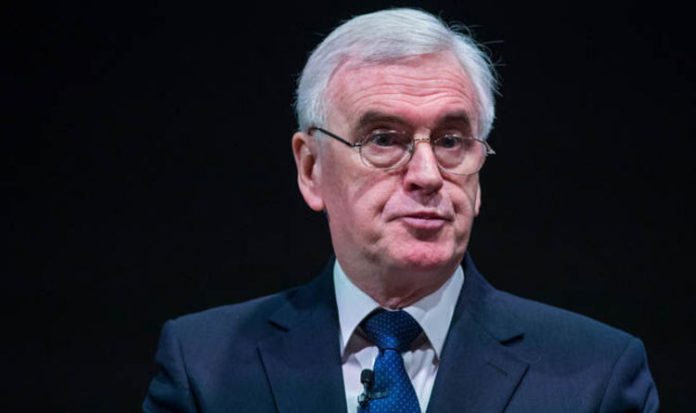 In an echo of the darks days of 1970s Britain, the hard left shadow Chancellor has pledged to join railway workers on the picket line if they launch winter strikes.

Mr McDonnell told train company bosses to “wake up” and understand the depth of anger felt by staff.

Pressed on whether a “winter of discontent” could be looming on the railways, the shadow chancellor said: “We will see what industrial action takes place.

“I’m hoping there will be negotiated settlements.

“But don’t underestimate the depth of anger amongst railway workers at the moment.

“And, if there’s ballots for industrial action and the management aren’t responding accordingly, I’ll be on the picket lines with the workers themselves.

“I think management of these individual companies now need to start waking up about just how, again, most people who are working on the railways, what’s happened with their standard of living, and how they feel as though their professionalism is being undermined.”

His words came as unions have warmly welcomed a pledge by Labour to “transform” workers’ rights, with special help for millions in the so-called gig economy.

Mr McDonnell received a standing ovation from the TUC Congress in Manchester when he laid out a series of measures aimed at “tipping the balance” from employers to workers.

A Labour government would ban zero-hours contracts, repeal the Trade Union Act, clamp down on bogus self-employment, end Private Finance Initiatives and set up a new Employment Department to drive forward the polices, he said.

He added: “It’s time to tip the balance to the workers. It is the biggest extension of individual collective rights our country has ever seen. It will transform the workplace and workers’ rights.”

Unite general secretary Len McCluskey said: “Every decent person in the country should applaud the proposals set out by John McDonnell.

“The impact on families and workers when work has been casualised, as it has been for millions in this country today, is appalling.

“It is simply not right for the sixth richest country on earth to have allowed a situation to develop whereby a worker only knows if he or she will earn a wage that day when they get a text message to tell them that they have a shift.”

Paddy Lillis, general secretary of the shopworkers union Usdaw, said: “We welcome the commitment to help workers on zero and short-hours contracts by requiring employers to guarantee a minimum number of hours for their staff.

“It is clear that Labour fully understands the problems low-paid workers have in getting enough hours to make a weekly wage they can live on.”

Mr McDonnell said workers in the gig economy will be given the same rights as other employees including sick pay and parental leave under a Labour government.

He criticised the Government’s Taylor Report into employment for “ignoring” trade unions.

He said: “Even if the Government adopt every positive recommendation in Taylor, it will not be enough because the most effective way to improve the lives of working people is through trade unions and collective action.

“Just because you don’t work regular hours doesn’t mean you can afford not to work when you are sick.

“Just because you work several jobs doesn’t mean you can afford to lose one of them without warning.

“Just because you value the freedom of independence or the convenience of flexibility doesn’t mean you have to forgo basic rights.”

Responding to Mr McDonnell’s TUC speech, Business Secretary Greg Clark said: “We care about what works – we have been cracking down on exploitative practices while also allowing people to work flexibly if they want to.

“Under the Conservatives for the first time, millions of workers will get a host of new rights including sick and holiday pay from day one and the right for all flexible workers to request a stable contract.

“Just like last time, Labour’s plans would put jobs at risk. We are proud to have record levels of employment in this country, with three million more people in work, but we must also ensure that workers’ rights are always upheld as part of our modern Industrial Strategy to create better paid and better quality jobs across the country.”