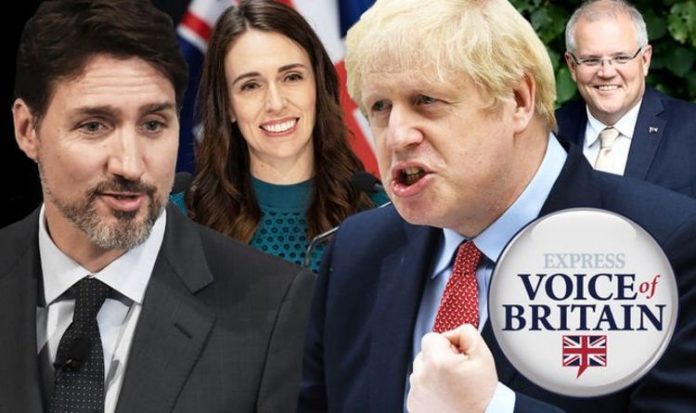 Britain could be moving towards forming the “CANZUK Union”, the acronym for Canada, Australia, New Zealand, after finally freeing itself from the bloc at the end of the Brexit transition period on December 31. Historian Andrew Roberts has described how the “superpower” nations, whose majority of people speak English, could form an alliance to be a free trade zone with the free movement of people. The ”CANZUK” nations are already set to agree lucrative post-Brexit trade deals over the coming weeks.

Mr Roberts said the alliance would be the fourth-largest economy in the world, ranking behind the US, China and the EU and would have a combined GDP of more than £4.6 trillion.

In our latest poll, which ran from 2pm until 9.30pm on Monday August 9, we asked: “Should the UK form a superpower alliance with Australia, Canada and New Zealand?”

A huge 94 percent of the 8,712 people who voted backed the idea from historian Mr Roberts of a “superpower” alliance between the four nations.

Express.co.uk readers believe the Brexit process has illustrated how the establishment of an alliance between the UK, Australia, Canada and New Zealand is something that should have happened before Britain joined the EU.

They also see it as an opportunity to “kick-start a revival” of the Commonwealth, providing the UK with a viable option outside the continental trading bloc.

One reader said: “The Commonwealth is our superpower. These nations are our friends and natural allies unlike the European gangsters.

“Get on with it Boris. Kick start a major strategic revival of the Commonwealth.”

A second person commented: “Kickstarting the Commonwealth would be another great idea. We have options OUTSIDE the EU!”

Another reader wrote: “At least Canada, Australia and New Zealand are our friends unlike many within the EU who only wanted the UK for its money.

“Also, such an alliance would prove to be a very influential stabilising force to other more volatile groups.

Brexit news: The UK and Canada are hoping to strike a lucrative trade deal (Image: GETTY)

Brexit news: Trade talks between the EU and UK have failed to make significant progress so far (Image: GETTY)

A fourth person claimed the nations could do “great things together” such as standing up to a “rampant China”.

They said: “We need to realise that the most valuable and precious thing that New Zealand, Australia, Canada, and Britain have to offer is not land, its not resources, it’s the people.

“Instead of allowing our politicians to constantly do us down we could choose to do great things together.

“There are things we simply can’t do on our own; space exploration for example or standing up to the likes of a rampant China making unreasonable demands in the decades to come.

“Its all very well and good splitting our people into smaller and smaller groups but we only ever really achieved true greatness when we teamed up.

“We all bring something to the table and our whole would surpass the sum of our parts by a long way.

“Teaming up would secure all of our futures for a very long time.”

Mr Roberts revealed the expansionism of China was the greatest threat and the biggest reason for the “CANZUK” union to manifest.

The “CANZUK” idea has been strengthened by the united front that Canada, Australia and the UK have put on in the face of China’s aggression and the joint decision to block Huawei from its 5G networks.

He said: “There is no reason why the American taxpayer should pick up the bill of being the world’s policeman forever, and an intimate alliance with CANZUK would provide welcome relief.

“The cost of curbing and containing China’s global ambitions would become the historic role of not one but two superpowers, as it is clear that the EU has no interest in trying to stop Chinese hegemony in Asia.

“A strong, prosperous CANZUK Union would make the Anglosphere a force-multiplier in a more uncertain world.”

If the countries were formed a federation, it would have a seat on the UN Security Council, as the UK already has a seat there.

According to The Royal Commonwealth Society, UK businesses want to see the Government prioritise trade deals with the Commonwealth after Brexit.