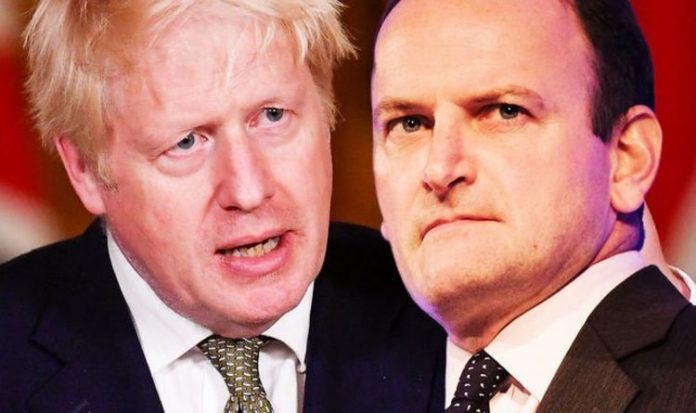 This week, the UK and Japan signed a free trade agreement at a ceremony in Tokyo. The UK-Japan Comprehensive Economic Partnership Agreement (CEPA), which was agreed in principle last month, is Britain’s first deal with a major economy since Brexit. The Government claims the agreement will boost trade with Japan by £15.2billion over the next 15 years – and British businesses will enjoy tariff-free trade on 99 percent of exports to the country.

After the ceremony, International Trade Secretary Liz Truss said: “How fitting it is to be in the land of the rising sun to welcome in the dawn of a new era of free trade.”

She added it would “pave the way” towards UK membership of the wider Trans-Pacific Partnership.

In an exclusive interview with Express.co.uk, former Ukip MP Douglas Carswell shed light on the other numerous trade deals sitting on the lap of Prime Minister Boris Johnson.

He said: “I think it is really encouraging that Britain is now negotiating all these free trade agreements with the wider world.

“The negotiation between Britain and the EU is important but the ones that will really count in the future are the trade deals Liz Truss truss and her team are negotiating with the world.

“Liz Truss is very quietly and effectively negotiating for us to be part of what is known as the Trans-Pacific Partnership.

“It is around the Pacific that you have got big economic growth.

“By being part of that, Britain can negotiate FTAs with a dozen different dynamic counties.”

He added: “We need to see that same spirit of new trade deals not only with Asia, but North America, South America and Africa

“Many countries around the world that we can have much closer trade deals.”

If the UK were to join the partnership, this share of global GDP is expected to rise to about 16 percent.

Australia and Japan have already informally pledged their support for British membership and others are unlikely to raise major objections.

In an interview with Express.co.uk, Australian Liberal Party Senator Eric Abetz said about the prospect of Britain joining the CPTPP: “I couldn’t see a reason why Britain shouldn’t, couldn’t or wouldn’t be part of it.

“Let’s hope they get excited by that prospect

“It would be a real enhancement for the UK and for all the other members of the partnership.”