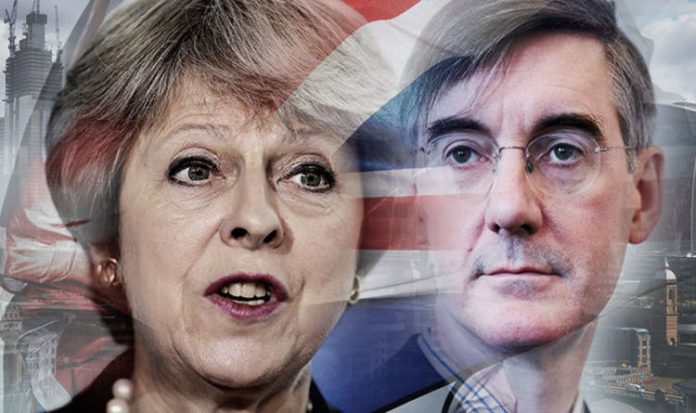 Forty-two out of 75 constituency parties reported increases in membership.

Many association chiefs reported a surge in membership applications since after the Prime Minister forced her customs blueprint through the Cabinet at a meeting at her Chequers country retreat last month.

The influx reverses a long-term decline in Tory membership since 2002.

A majority of associations in constituencies represented by Cabinet ministers reported an influx in Euro-sceptic members.

Big rises were reported in areas represented by ministers who backed Remain in the 2016 EU referendum.

The surge came after leading Brexiteers including Arron Banks, a former Ukip donor and founder of the Leave.EU pressure group, urged Eurosceptics to join the Tories to try to influence the Government’s European policy. He has called his campaign to encourage Eurosceptics into Tory ranks “Blue Wave”.

In a newspaper article today, he wrote: “The best way to secure Brexit and our country’s future is via the Conservative Party. It is in Government and, for now, calls the shots.

“To that end, I am urging the 90,000 members of my Brexit campaign Leave.EU and the 1.4million who follow us on social media to join the Tories and have a say.”

He added: “A grassroots rebellion in the Tory party is possible. In the right conditions, a new leader can be swept to power, and sanity can prevail. Our aim is to unite the right.”

The newspaper survey of Tory associations found that Mrs May and 11 of her Cabinet ministers had seen membership increases in their local parties.

Only two of the 12 had voted to leave the EU in the referendum.

He said increases were likely “where MPs were for Remain but constituencies voted to Leave”.

Sam Gyimah, the Remain-backing universities minister, saw an increase of 75 members in his East Surrey constituency party while the Devizes association of Energy Minister Claire Perry, another Remainer in 2016, welcomed 20 newcomers. Foreign Office Minister Alistair Burt, who recently carried out an online survey in his constituency to gauge support for a second EU referendum, saw a 10% rise in local party membership.

Pro-Brussels Tories have complained that their party is being targeted by similar “entryism” tactics by hard-line Brexit supporters to those used by the hard-Left in the Labour Party.

Former business minister Anna Soubry claimed it was “good news” that Conservative Party chairman Brandon Lewis was “getting a firm grip on entryism and has rejected an application to join the Conservatives from Arron Banks.”

Stephen Dorrell, a former Tory Cabinet minister and head of the pro-Brussels European Movement, said Mr Banks’s campaign “must not be allowed to succeed.”

He said: “His approach would turn a great national party into a single-issue pressure group with no more moral authority than a rump of Ukip.”