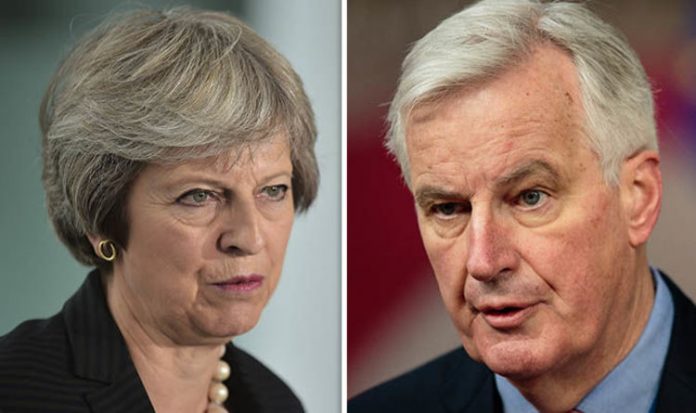 The Prime Minister drew sharp criticism following the publication of the Chequers White Paper in July, which was blasted by Brexiteers for offering key concessions to Brussels.

He told Express.co.uk: “Instead of going in with a strong hand and demanding a good deal for the UK, she went in with a begging bowl accepting whatever the EU was offering.

“At this stage Theresa May has made such a mess of the negotiations that nothing good could ever come from them.”

MEP Margot Parker added: “I do think the Prime Minister should take note seriously about the dissatisfaction at grassroots level of the strength of feeling about capitulation to Brussels.

“It was quite clear that the vote to leave the EU meant taking back full powers from Brussels – not a loose ‘semi remain’ in the orbit of the EU model.”

Mr Aker warned if the Prime Minister’s ‘soft’ Brexit proposal is accepted, the Conservative Party is likely to lose at the next General Election, paving the way for a Corbyn Government.

The EU lawmaker instead called on Tory MPs to “show some backbone” and hand in letters of no confidence to the 1922 Committee in a bid to oust Mrs May from office.

He said: “While we have Theresa the Appeaser leading the charge for Brexit, nothing will change, she doesn’t want to leave so why would she seek less EU control?

“The only way Brexit will be saved is if the Tory MPs start to show some backbone and get their letters in to the Chairman of the 1922 Committee.”

Mr Aker called on Tory MPs to “put their feet down” and tell Mrs May “enough is enough”.

However he accused them of thinking too much about their own careers, giving Mrs May a green card to “get away with anything”.

Both Mr Aker and Ms Parker instead called on the Government to support a ’no deal’ Brexit, and stated this may force the EU into coming back to the UK “begging for a deal”.

In a damning conclusion, Mr Aker said: “If we were to tell the EU that we are going for a ‘no deal’, then I think they would come back to the table very quickly and offer us the end to EU dictated migration rules, for future EU payments after a two year transition and a free trade agreement.

“The EU needs us more than we need them, we would be in a position of strength if we had anyone mildly competent leading the negotiations.”