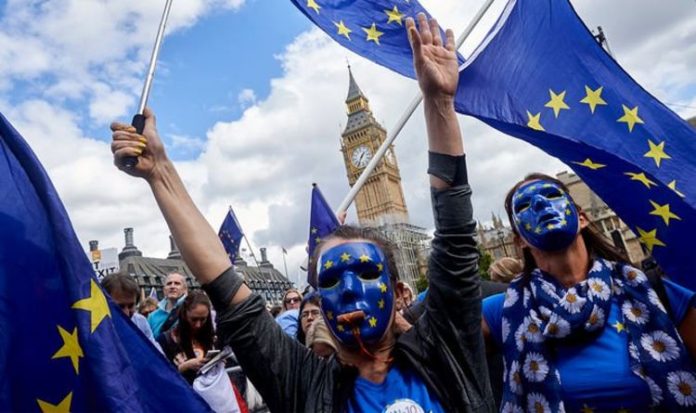 Rejoin EU, a campaign aiming to take the UK back into the EU, made the sensational claim on Twitter. The group asked its followers: “When we join the EU again what are you most looking forward to having again that we lost when leaving?”

However a recently published Kantar poll found 52 percent of Britons would vote against re-joining the EU in any referendum.

If Britain were to reapply for membership it would have to agree to adopt the Euro and join the borderless Schengen Zone.

It is also highly unlikely to regain the UK rebate, first negotiated by Margaret Thatcher, which returns some of Britain’s financial contribution to London.

However supporters of Rejoin EU seemed confident Britain would return to Brussels.

In response to the question one said: “Holding my head high instead of feeling a sense of shame when I meet Europeans.”

Another added: “Regaining my freedom of movement & restoring rights of EU citizens here in Great Britain.

“Only by rejoining [the] EU itself can we regain British influence in Europe, that’ll be some years off.”

READ MORE: Rick Stein’s Brexit upset unmasked – ‘I like being joined to France’

However Europhiles suffered a bitter blow earlier this month when Labour leader Sir Keir Starmer, formerly a passionate Remainer, said he would not attempt to take Britain back into the bloc.

Speaking to the BBC he said: “We’ve just had four years of negotiation.

“We’ve arrived at a treaty and now we’ve got to make that treaty work.”

Boris Johnson signed a new trade deal with the EU on Christmas Eve which came into effect at the end of December.

This provided free trade without Britain having to pay into the EU budget or accept European count judgements.

However some business owners have complained of increase regulations and red tape since the new rules came into effect.

Earlier this month shell fish transporters protested in Westminster claiming their catch has started to rot before it reached the European market.

However Brexit was delayed a number of times and only finally took place in January 2020.

For another year Britain remained in an EU transition period during which it continued to implement many laws made by the bloc.