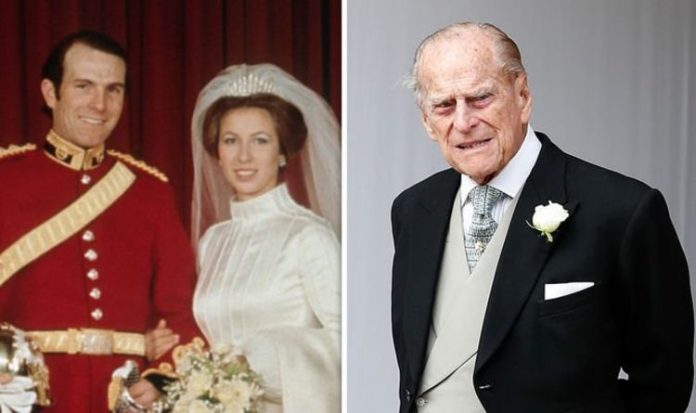 Royal names on official documentation have been the topic on everyone’s lips this week after Meghan Markle became embroiled in a row regarding her name on Archie’s birth certificate. It has emerged that the Duchess of Sussex’s given names ‘Rachel Meghan’ were removed from the document three weeks after it was registered, so it now just reads “Her Royal Highness Duchess of Sussex”. The Duke’s name was changed to insert the word ‘Prince’.

Reports suggesting Meghan was responsible for the change were quickly countered by a spokesperson for the Duchess claiming it was “dictated” by the Palace.

Then a source told Express.co.uk that the change was made to “ensure consistency in the name and title of The Duchess of Sussex with other private documents”.

However, this is not the first time a row has ensued over a name on a birth certificate.

In fact, the Queen and Prince Philip clashed after Her Majesty refused to give their children his surname on birth certificates.

Her Majesty was reportedly brought to tears by his “brutal” attitude.

Princess Anne will have pleased her father by using the name Mountbatten-Windsor (Image: GETTY)

However, later, the Princess Royal listed her surname as Mountbatten-Windsor on her marriage certificate which included Philip’s family name Mountbatten as well as the Royal Family’s Windsor.

This would have meant a lot to the Duke of Edinburgh after his fury over the situation.

After the birth of Prince Charles in 1948 and Princess Anne in 1950, Prince Philip initially intended to give the royal children.

When the Queen ascended the throne in 1952, Mr Churchill’s Cabinet put pressure on her to continue using Windsor, chosen by George V in 1917 to replace the German name Saxe-Coburg and Gotha, because of the anti-German sentiment at the time.

Although she sympathised with her husband’s wishes, the Queen agreed with the Prime Minister.

She issued a public declaration on April 9, 1952, that “her children will be styled and known as the house and family of Windsor”.

According to reports at the time, it “hurt Prince Philip deeply” and he felt “just like a bloody amoeba” within the Royal Household.

The Duke of Edinburgh complained he was the “only man in the country not allowed to give his name to his children”.

It is believed he was particularly aggrieved because he had already had to give up his Greek nationality, renounce his born titles and become a naturalised British citizen.

According to the book ‘Elizabeth the Queen’ by royal biographer Sally Bedell Smith, Philip refused to let the matter drop and in 1960, some concessions were made.

When the Queen became pregnant with Prince Andrew, she told then-Prime Minister Harold Macmillan that she “absolutely needed to revisit” the issue of the family name because it had been “irritating her husband since 1952”.

Ms Bedell Smith cited an entry in Mr Macmillian’s diary in which he wrote: “The Queen only wishes to do something to please her husband – with whom she is desperately in love.

“What upsets me is the Prince’s almost brutal attitude to the Queen over all this.

“I shall never forget what she said to me that Sunday night at Sandringham.”

Mr Macmillan passed the issue onto his deputy, Rab Butler, and the Lord Chancellor Lord Kilmuir.

Mr Butler told Mr Macmillan in a telegram that the Queen had “absolutely set her heart” on making a change.

In the end it was decided that those of the Queen’s descendents not entitled to the HRH style, and not princes or princesses, or female descendents who married, could use the Mountbatten name.

She made this declaration in the Privy Council that year, but the first time the surname appeared was Anne’s wedding documents.

When Anne tied the knot with Mark Phillips at Westminster Abbey on November 14, 1972, she put her maiden name down as Mountbatten-Windsor.

The first time Mountbatten-Windsor was used on a birth certificate was for Prince Edward’s daughter Louise.

It was later used for his son James and for Meghan and Harry’s son Archie.

‘Elizabeth the Queen’ was written by Sally Bedell Smith and published by Penguin in 2012. It is available here.