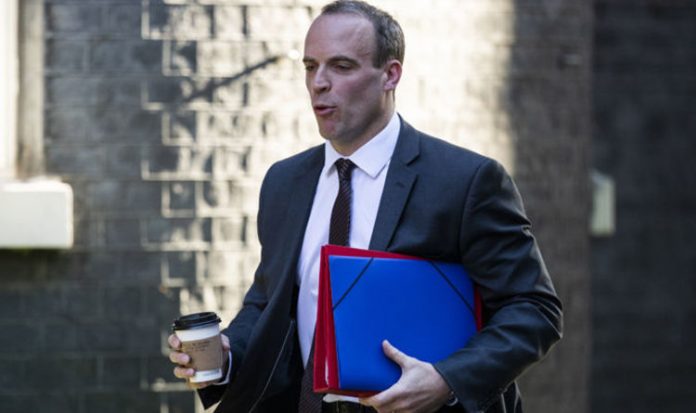 The remarks come after Mr Raab’s revelation that he had had an “extended” phone call on Friday with EU chief negotiator Mr Barnier to review progress in the Brexit talks.

But his suggestion that an agreement could be in the pipeline offering a workable “backstop” solution to prevent the need for a hard border between Northern Ireland and the Republic prompted scepticism.

The EU wants Northern Ireland to remain in a customs union and single market, while the UK instead wants to see a soft border reliant on technological solutions to keep trade moving.

And an EU diplomat told The Guardian nothing was imminent, saying: “Nothing is going to happen until after Tory party conference on their end.

“In reality this is a matter of who blinks first. We don’t think it is going to be the EU.

After his phone conversation with Mr Barnier, Mr Raab claimed that while there were still issues which needed to be resolved, discussions were taking place in the “right spirit”.

Outlining plans for further talks after EU leaders meet next week for an informal summit in Salzburg, he added: “While there remain some substantive differences we need to resolve, it is clear our teams are closing in on workable solutions to the outstanding issues in the withdrawal agreement, and are having productive discussions in the right spirit on the future relationship.

By contrast, Mr Barnier’s assessment was more in keeping with that of his diplomat, saying that while there had been a “useful dialogue”, there were still “substantive differences”.

These including questions about the Irish border, and protections for regional speciality food products known as “geographical indications”.

He stressed that they were also working to find “common ground” on the relations after Britain has left.

Earlier, Mr Barnier had delivered an upbeat assessment suggesting a deal could be tied up within six to eight weeks, in time for agreement at a special leaders’ summit in November.

However, both he and European Commission President Jean-Claude Juncker have also dismissed the key aspects of Mrs May’s so-called Chequers strategy, thrashed out earlier this year at the Prime Minister’s country retreat.

The plan suggest a common rule book on goods and a customs arrangement allowing the UK to enjoy frictionless imports and export and an independent trade policy – but both men have said the ideas to be unacceptable.

With time starting to run out, Brexit intrigue has ramped up noticeably in recent days.

Mr Raab caused ructions on Thursday after suggesting that Britain might withhold some of the £39 billion “divorce bill” agreed in December in the absence of a withdrawal agreement.

Meanwhile Bank of England governor Mark Carney, who has extended his tenure in a bid to see the process through, spelled out the potential consequences of a no-deal Brexit during a special Cabinet meeting during which he warned ministers of a 35 percent crash in house prices over three years in a worst case scenario.

Speaking in Dublin yesterday, Mr Carney said the Bank had used its “stress test” to ensure UK banks could continue to function in the event of a “disorderly” Brexit.

He added: “The Bank of England is well-prepared for whatever path the economy takes, including a wide range of potential Brexit outcomes.

“Our job, after all, is not to hope for the best but to plan for the worst.”