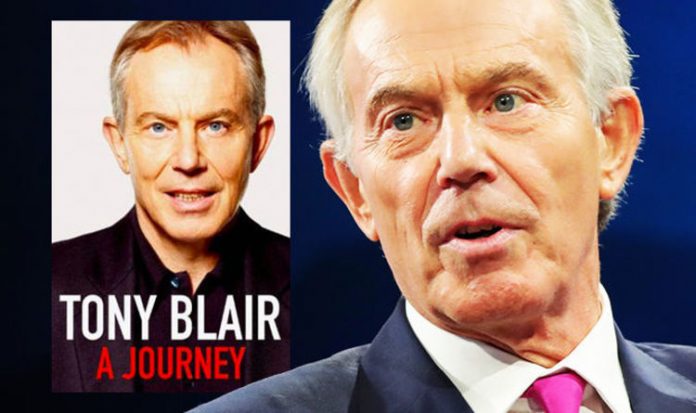 Mr Blair revealed dialogue from his private meeting with Queen Elizabeth in 1997 in the book which are strangely similar to lines from the Oscar-winning 2006 film starring Helen Mirren and Michael Sheen.

Peter Morgan, a Bafta-winning screenwriter, said Mr Blair must have watched the film, blurring his memory of actually meeting the Queen.

Mr Morgan, 55, said the scene in the former prime minister’s autobiography “sounds very much like the scene that I wrote.”

The similarities between the fictional script and Mr Blair’s autobiography, A Journey: My Political Life, for which he was reportedly paid a £4.6 million advance, are striking.

In A Journey, Mr Blair claims that the Queen said to him: “You are my 10th prime minister. The first was Winston. That was before you were born.”

Speaking to US radio, Mr Morgan said: “Tony Blair, when referring back to that critical period in the aftermath of Diana’s death used a number of expressions and quotations that seemed to me to be very familiar because they sounded like my dialogue.

“And I remember thinking, ‘Well, hang on a minute. That can’t be right’.

“Surely he didn’t say the very things that I’ve written that he said? Much of what I write, I’m just guessing.

“But I’m pretty sure you’re actually just quoting what I wrote, which you have watched and which you’ve subsequently denied that you’ve watched but you’ve clearly watched.’”

A spokesman for Mr Blair insisted: “He has never watched The Queen.”

Mr Blair’s memoir was released in 2011, five years after the release of The Queen.

Stephen Frears, who directed The Queen, reportedly laughed when he was informed of the similarities.

Speaking to the Telegraph, Mr Frears said: ”Now people will accuse us of bugging them.”