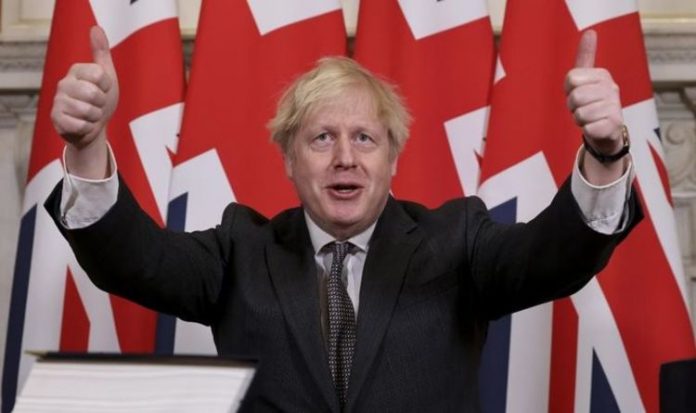 After years of uncertainty, the Prime Minister agreed a Brexit deal with the EU in December with the UK leaving the transition period on January 1. In a new report, economic advisor Dr Adolf Rosenstock claimed with the uncertainty surrounding Brexit now gone, future investment into the UK will soon pour in. In particular, he predicted Brexit Britain to have greater ties with the large economic markets in the US, China and India.

The advisor for MainSky Asset Management wrote: “Despite all the negative consequences, the fact that with the Brexit deal the years of uncertainty about how and when to exit has disappeared for the market and that it is now in the hands of Great Britain under what conditions it wants to trade with countries outside the European Union is likely to be much more decisive for the future of the British financial market.

“In the long run, Brexit could lead to stronger relationships with global trading partners such as China, India or the USA.”

Since the UK left the EU and due to the successful vaccination programme, the pound sterling has risen in value after struggling for so long.

In particular, the exchange rate to the dollar has risen to levels not seen for two years and is currently at one to $1.40.

With almost 17 million peopled vaccinated as of February 18, Dr Rosenstock claimed the UK is set for a strong upswing in its stock and bond markets.

He added: “We assume that Great Britain will experience a strong cyclical upswing in the coming months – and therefore months earlier than the European Union.

“It is therefore hardly surprising that not only the pound rate has recovered in recent months, but that the British stock market has also ended its long phase of underperformance for the time being.

“In addition, with the rising external value of the pound and rising yields, the British bond market is now also moving back into the sights of investors.

Ms Truss intends to create a three-way alliance with the US and EU to pressure China into acting more responsibly amid accusations of human rights violations.

A Whitehall source told : “Liz sees a role for Britain as great arbiters and power brokers, using our influence to bring the likes of the EU and US together to sort out the big knotty issues facing world trade.

“Democracy and free and fair trade has to win the day, and that’ll only happen if we all work together.

“She ultimately wants to set the stage for fruitful and good-natured cooperation between sovereign equals with shared values.”

The EU signed an investment deal with China last year and has been criticised for doing so.