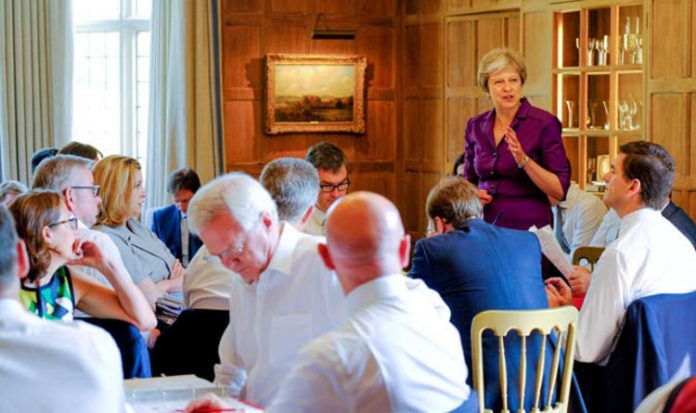 In an ominous warning to the Prime Minister, some 60 percent of those surveyed by the ConservativeHome website said the deal as outlined so far would be bad for Britain if implemented and the same proportion said they did not support it.

About 31.5 percent of the 1,225 ConservativeHome opinion panel-members taking part thought it would be good for Britain, and 33 percent that they would back it while about 6 to 8 percent did not have an opinion.

The website said the speed of the response was particularly striking as the survey was issued on Saturday when England was facing its crucial World Cup quarter-final and Downing Street’s promotion of the plan was dominating headlines.

Separately, pollsters Survation said 33 percent of just over 1,000 people interviewed online on Saturday backed the Chequers deal against 23 percent opposing it and 44 percent not expressing an opinion.

However, 38 percent saw it as a “sell-out” and not faithful to the referendum, although 35 percent accepted it was the best deal Britain could get.

The recent public Government squabbling over Brexit appears finally to have made inroads on Conservative popularity with Jeremy Corbyn’s party moving into the lead on who people would vote for in an election.

Survation found support for Labour up two points since June 21 at 40 percent, while the Tories were down three, on 38 percent.

More than a third, 34 percent, think Mrs May should lead the Tories into the next election, with 24 per cent wanting her to quit now and the same proportion believing she should resign after Britain legally leaves the EU next March.